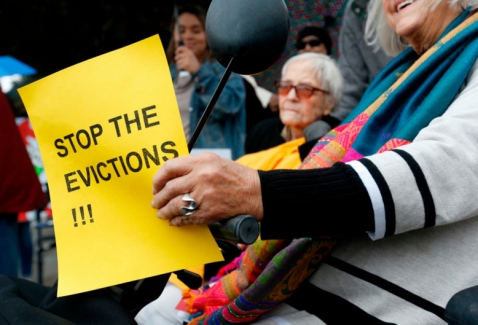 Photo:  Resident Martha Kapla, right, holds a sign during a rally in front of an assisted-living home in San Pablo, California, in December. Nearly 80 elderly and disabled residents were told to be out of the building by the end of January. Photo by Jane Tyska, Bay Area News Group

March 18, 2020 (San Diego's East County) - As millions of anxious California renters worry about their health and paychecks in the wake of the COVID-19 pandemic, Gov. Gavin Newsom has issued an executive order that allows cities and counties to stop landlords from kicking out tenants who miss their next rent payment — if local governments want to do so.

Tenant-rights groups, which have been pushing for a statewide moratorium on nearly all evictions except those necessitated by domestic violence or similar circumstances, expressed deep disappointment over the governor’s move.

They argue that stopping short of a sweeping ban endangers low-income renters’ ability to self-quarantine and take other recommended health measures when being forced out of the very homes in which public health officials want them to remain.

The Newsom administration did not respond to multiple requests for on-the-record comment. A spokesperson with the California Department of Public Health wrote via email, “The state stands by the guidelines it has released. This is a quickly evolving situation and we are routinely reviewing and updating guidance as needed.”

Many major cities in California have already moved to impose temporary moratoriums on evictions in recent days, including Los Angeles, San Francisco and Oakland.

The Newsom administration expressed confidence that more local governments would do so in the wake of the executive order, which clarifies California civil code to allow cities and counties to halt evictions when a renter can demonstrate economic hardship caused by the pandemic.

But many California cities have yet to implement full eviction bans. And tenant advocates say going from local government to local government to lobby for eviction protection — especially in more conservative parts of the state without strong local activists to press the issue — would be tremendously difficult.

“The vast majority of cities have not taken this type of action yet,” said Sasha Harnden, policy advocate with the Western Center on Law and Poverty. “Tenants won’t have a unified set of protections. It will depend on what we will be able to achieve in the local jurisdictions while they are juggling so many other considerations right now.”

New York and Massachusetts have imposed statewide moratoriums on nearly all evictions. But the Newsom administration says complexities and ambiguities in California law make such sweeping executive action legally thorny. Officials say they reserve the power to take more action if necessary.

While Newsom’s declaration does not limits how much landlords can charge for rent, a new state law that took effect in January prohibits rent hikes of more than 5% plus inflation once a lease expires for many California residences.

How landlords may react

Landlord groups said they were not in the business of evicting renters for no reason. The California Apartment Association, the premier lobbying group for landlords, has recommended to its members to be flexible with tenants struggling to make ends meet.

“We get it. We don’t want to put anybody out on the street,” said Debra Carlton, vice president for public affairs at the California Apartment Association. She said her organization was in the process of analyzing Newsom’s order.

Carlton expressed relief that the governor’s order stated that local governments should halt evictions only in cases of rent non-payment, that tenants causing “nuisances” or conducting illegal activity are not protected. The order also does not instruct local governments to waive rent payments entirely.

“It’s gotta be clear that tenants still owe the rent,” said Carlton. “Obviously what he’s trying to do is encourage local governments to follow some sort of basic outline that he’s provided here.”

A group of Democratic lawmakers late last week urged the governor to impose a statewide moratorium on all evictions, regardless of whether a renter could show financial hardship. With the state Legislature on emergency recess till at least April 13, any more aggressive statewide eviction protections would have to come from Newsom.

Both landlord groups and tenant-rights activists have also  asked the administration for emergency financial assistance for struggling renters. An emergency measure passed by the state Legislature yesterday frees $1.1 billion for Newsom’s COVID-19 response. It is unclear how much of that may be spent on emergency rent assistance.

Shirley Gibson, directing attorney at the Legal Aid Society of San Mateo, said in an interview before Newsom’s announcement that her office was receiving calls from renters who had been served eviction notices and were looking for help.

Marcos Segura, a tenant attorney with Central California Legal Services, said allowing evictions for reasons other than failure to pay rent will leave many of his clients vulnerable.

Renters can be evicted for other reasons — landlord renovations, tenants causing a nuisance, owners deciding to move back into their property.

People evicted for such reasons “are not getting any relief from this pandemic,” said Segura.