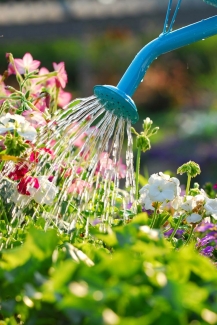 July 9, 2021 (San Diego) - As extreme drought claims most of the state, California Gov. Gavin Newsom today asked Californians to voluntarily cut their water use by 15%.

The request, Newsom said, applies to businesses and agriculture as well as residents. Meeting the target could save enough water to supply 1.7 million average households for one year, according to state officials.

Speaking from windy Lopez Lake in San Luis Obispo County, Newsom stressed that the reductions are voluntary and urged Californians to make common sense cuts like looking for leaks and running full loads of laundry and dishes.
“Not here as a nanny state. And we’re not trying to be oppressive,” he said. “But nonetheless, the sober reality is such that here we are again, and we will need to proceed with the lessons learned from the last drought.”
Newsom also today expanded drought emergency declarations to nine more counties, including three parched Bay Area counties and several along the Central Coast. Fifty counties, home to 42% of the state’s population, are now under drought emergencies.
The nine new counties with emergency declarations are Inyo, Marin, Mono, Monterey, San Luis Obispo, San Mateo, Santa Barbara, Santa Clara and Santa Cruz. Conditions are not severe enough to include Los Angeles, Orange, Riverside, San Bernardino, San Diego, Imperial, San Francisco and Ventura, all of which have sufficient supplies in storage so far.
The emergency declarations will ease environmental and other regulations to speed drought responses, such as purchase of bottled water supplies. 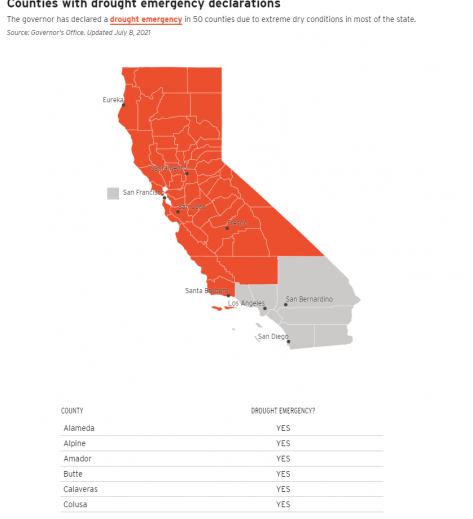 During the last drought from 2012 to 2016, Californians were ordered to cut their water use by an average of 25% statewide. Even with the new drought emergency declarations, there is still no statewide emergency or mandate to reduce water use.
For now, the statewide requested cuts are voluntary. Standardized water waste rules stalled after the last drought, leaving Californians with a patchwork of water restrictions that has some Californians restricting their shower time and others flush with water.
Between 2013 and 2016, Californians on average reduced their residential use by 21% when they were asked to cut back.
In April, Californians in residential areas used 14% less water than they did in 2013. But the State Water Resources Control Board warns that water use is ticking up. April was the first month of 2021 when urban suppliers distributed more water than in 2015  — with an estimated 152 billion gallons compared to 149 billion gallons, said Charlotte Ely, conservation supervisor for the water board at a June water board meeting.
“Historically low winter and spring precipitation has resulted in the highest April numbers since 2015,” Ely said. “We are still well below the 2013 baseline, but the savings between 2013 and (the) present is narrowing.”
Newsom and Natural Resources Secretary Wade Crowfoot stressed that while California is no stranger to droughts, climate change is exacerbating conditions. Scorching heat is drying already parched soil and water supplies.
Water providers in Santa Clara and Marin counties welcomed Newsom’s decision.
The declaration “ensures that state agencies are empowered to facilitate critical water transfers and exchanges necessary to continue a reliable water supply for the 2 million people and thousands of Silicon Valley businesses in Santa Clara County,” Tony Estremera, board chair for Valley Water, said in a statement.
Jeanne Mariani-Belding, a spokesperson for Marin County’s largest water provider Marin Water, said “this is a historic drought and it will take all of us working together, and conserving as much water as possible, to get through it.”