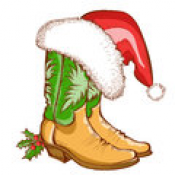 ‘Twas the night before Christmas and all across East County

Not a creature was stirring, from Borrego to El Monte.

The cowboy boots were hung by the chimneys with care

The weather is sunny with just a slight breeze

While much of our nation shivers in a freeze.

And from their computers amid holiday dishes

Our readers have sent Santa their holiday wishes.

As El Nino rings in the New Year with holiday bells

Over in El Cajon, loyal arts fans are hopin’

To stop El Monte Valley from becoming a sand mine.

In La Mesa’s downtown, where construction is done,

Merchants want shoppers to return-- every one.

Parents in Alpine, want a judge to soon rule

That Grossmont must fund the long-promised high school.

In Jamul, where completion of a casino draws near

Environmentalists’ voices are raised in a chorus

For Santa to please put a stop to the shooting.

Out in the vineyards from valleys to mountaintops

So all the town’s pie makers can be rolling in dough.

Way out in Descanso, KNSJ’s engineer

Wants  a strong and clear signal for all of next year.

San Diego’s Mayor has  snuggled in his bed

While visions of a new football team dance in his head.

Had just settled down for a long winter's nap,

When out o’er the lodge there arose such a clatter,

They sprang from their beds to see what was the matter.

Away to the windows they flew like a flash,

Jumped on their hoverboards and out they did dash.

The moon on the breast of the new-fallen snow

Gave the lustre of mid-day to objects below,

Beside golden eagles his reindeer they came,

On, COMET! on CUPID! on, DONDER and BLITZEN!

So up to the mountaintop the coursers they flew,

With the sleigh full of toys, and St. Nicholas too.

And then, in a twinkling, guests heard on the roof

The prancing and pawing of each little hoof.

As  they drew in their heads, and were turning around,

Down the chimney St. Nicholas came with a bound.

He was dressed all in fur, from his head to his foot,

And his clothes were all tarnished with Chariot Fire soot;

A bundle of toys he had flung on his back,

And he looked like a backpacker opening his pack.

And the beard of his chin was as white as the snow;

And its  smoke encircled his head like a wreath;

So folks laughed when they saw him, in spite of themselves;

A wink of his eye and the red cowboy hat on his head,

He spoke not a word, but went straight to his work,

And filled all the stockings; then turned with a jerk,

And laying his finger aside of his nose,

And giving a nod, up the chimney he rose;

“Happy Christmas, East County, and to all a good night!”