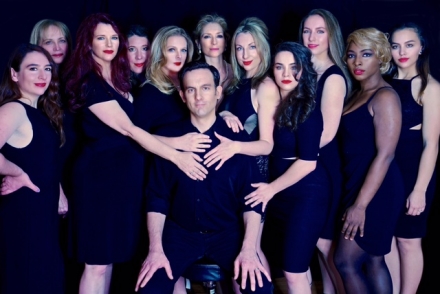 Bailey is a humble man and gives much credit for the show to others. Christopher T. Miller, who not only played the lead (Italian director Guido Cortini) also did duty as musical director. Bailey claims there would not be a show without Miller. He also credits O.P. Hadlock, who did an amazing job creating and constructing the set.  Three gradual, long curved marble-like steps, with doors surrounding the top step, give an Italian spa look.

Nine was written by Maury Yeston as a class project in 1973. The story is also based on the director Federico Fellini's semi-autobiographical film 8 1/2. The story of Nine shows the roles of women in a man's life: mother, sister, lover, friend, teacher, boss and muse. Guido Cortin is about to turn forty. He cannot come up with a movie plot. His wife says she is going to leave him if he does not put more effort into the marriage. So he takes her to a spa near Venice. Once there, Guido goes into his head. That's where we meet the woman who has influenced his life. Between the women in his head, himself at age nine and the woman running his life now he finally comes up with a musical based loosely on his life.

Lamplighters continue to produce plays that are off the beaten theatre road--shows no one else is doing. It’s refreshing, but also a risk. When we watch reality singing shows, we bond when we hear the familiar. However, sometimes the talent can pull off a gem.

Nine, for me, is a tweener. But for a more sophisticated palette, maybe a nine. Christopher T. Miller, in the lone male lead, brings the angst of a mid-life crisis. Alyssa Austin, who plays Carla, Cortini's mistress, is an absolutely perfect sex kitten. She is a total star when she sings, "A Call From The Vatican." She also choreographed the show.  Keri Miller plays Guido's wife, a woman who knows her man. The other main woman and mistress is Oliva Torres as Claudia. All gave strong performances.

Many of the women have solos featuring their amazing voices. Another feature of the show is that all the women are dressed in black, but every woman has something visually special about her. Some have fabulous dresses, some have great shoes. One has great earrings, another a necklace, some fabulous hair, other a great shape. One thing I really loved was the beautiful fans they used for a number in the second half.

A real surprise for me, and one I loved, was Maximo Paniagua who played young Guido at nine when he sang "Getting Tall."  This song to his older self is a total showstopper.

Let your Italian self come out to see a musical.