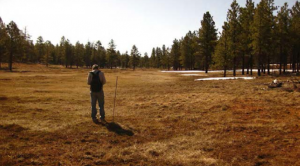 April 12, 2015 (San Diego’s East County) - Nine states report record low snowpacks. A report from the US Department of Agriculture states, “the largest snowpack deficits are in record territory for many basins,especially in the Cascades and Sierra Nevada where single – digit percent of normal conditions prevail. Very low snowpacks are reported in most of Washington, all of Oregon, Nevada, California, parts of Arizona, much of Idaho, parts of New Mexico, three basins in Wyoming, one basin in Montana, and most of Utah.” This region is undergoing the warmest winter temperatures since record keeping began in 1895. 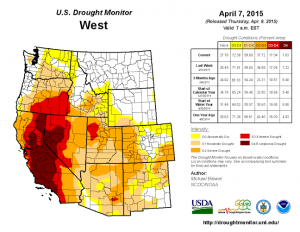 “There has been near average precipitation in many areas, but it has mostly been rain. The snowpack normally serves as a natural reservoir, which feeds the rivers during spring snowmelt. The lack of snow will have an impact on streams and reservoirs in much of the west,” said Michael Strobel, Director of the National Water and Climate Center in Portland.

Much of California, Western Nevada and Southeast Oregon are already experiencing extreme drought conditions. This is especially critical in California, which is its fourth year of a drought.

Some question the wisdom of Governor Jerry Brown’s response to this news. The mandatory 25% water use reductions that he announced, in cities and towns across California, seems to place an unequal burden on communities.

While the idea is new in some areas, San Diego has been practicing conservation since 1990. Water usage has already been cut back 12%, despite a population increase of 700,000 since then. Brown’s mandate calls for much deeper sacrifices than is called for areas that have not been addressing the situation.

“The Water Authority strongly supports additional conservation and the governor’s goals are laudable – but they haven’t been translated yet into proposed regulations that are equitable, protect our economy or advance sensible long-term water policies,” said Mark Weston, chair of the San Diego County Water Authority’s Board of Directors.

There are other issues in the Bay Delta estuary, which stretches from Sacrament to San Francisco Bay. There does not appear to be enough water for residential use and giant agribusinesses. So why are these agricultural concerns exempt from water reductions?

“The key challenge here, aside from getting the water, is to be able to collaborate together and not try to blame other people and point fingers,” said Governor Brown. “This water system in California is extremely complex. It affects different people differently. Some people do much better than other people.”

He added, “It’s easy to talk and pop off. It’s more difficult to speak more wisely and thoughtfully.”

...when Brown was first Governor he opposed water storage projects. Now we are paying the price. And the voters still re-elected him. We pay a huge price for people who do not pay attention.