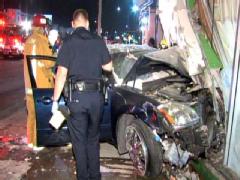 September 19, 2011 (El Cajon)—El Cajon Police seek the driver of a Nissa Maxima who lost control of his vehicle at 11:38 p.m. last night, crashing into two businesses on Main Street. The driver, whose identity is unknown, fled the scene and left a seriously injured passenger in the wreckage. 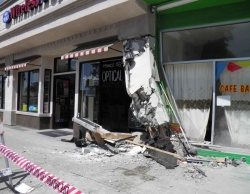 ECM news partner 10 News reports the car struck the building in between Café Baghdad and Prince Wireless & Optical. Some witnesses estimated the vehicle was traveling at high speeds up to 100 mph.

No one in the building was injured. The vehicle caused major damage to the façade; building officials from the City of El Cajon responded to inspect the building.

The driver of the vehicle fled the scene on foot, abandoning a male passenger who suffered significant head injuries. The passenger was transported to Sharp Memorial Hospital for treatment, but his injuries appear not to be life threatening.

The driver of the vehicle is still at large and faces felony charges for leaving the scene of the accident. The driver’s injuries are unknown at this time. This investigation is ongoing.

Anyone with information on the collision, or the identity of the driver of the vehicle, is asked to please contact Detective Tim Roberts at (619) 441-1632.