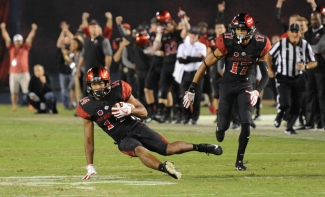 Despite getting outgained 429-263, including a 269-136 spread in passing yardage, the Aztecs converted two Huskie turnovers into 14 points, before coming up with two crucial interceptions late in the fourth quarter to help secure the team's seventh consecutive victory dating back to last year.

Rashaad Penny was bottled up for much of the first half, but still gained 107 yards on 25 carries, becoming the first Aztec running back since Marshall Faulk in 1992 to open a season with five straight games over 100 yards rushing.

In addition, Christian Chapman completed 10 of 19 passes for 136 and two touchdowns, finishing his third straight game without an interception, while tight end Kahale Warring posted three catches for 39 yards and one score.

Juwan Washington electrified the crowd on the opening kickoff return, racing 96 yards through tacklers for a touchdown to give SDSU an early 7-0 lead.

However, NIU (2-2) quickly responded with a 7-play, 73-yard drive, culminating in a 34-yard scoring strike from quarterback Daniel Santacaterina to wide receiver Christian Blake down the right sideline.

The Aztecs were limited to a three-and-out on their ensuing possession, but on the first play after the punt, reserve linebacker Andrew Aleki alertly pounced on a loose ball at the Huskie 33-yard line after a fumble by NIU running back Andrew Parchment.

SDSU wasted little time capitalizing on its good fortune, as Chapman hit Penny in the right corner of the end zone on the very next snap, putting the host school up 14-7 with just over five minutes elapsed in the period.

However, the Huskies answered with another long drive, marching 77 yards in 13 plays to even the score at 14-14. Santacaterina connected with Blake six times for 44 yards on the possession, including the final 10 for the tying touchdown.

NIU seemed poised to take the lead early in the second quarter, advancing 71 yards in 10 plays to the SDSU 20. However on 2nd-and-4, safety Tariq Thompson stepped in front of a Santacaterina slant pass and returned it 83 yards for the go-ahead score. With the turnover, SDSU recorded its sixth interception return for a touchdown in the last 17 games.

After a Huskie punt, the Aztecs finally managed their longest sustained drive of night, as Chapman found a wide-open Warring in the end zone from 8 yards out to cap a 7-play, 66-yard march with just 2:12 remaining in the first half. Just two plays earlier, the SDSU duo hooked up for a 21-yard gain on a 3-and-8 to keep the drive alive.

With time winding down, SDSU got the ball back following another punt and swiftly marched into NIU territory. On 4th-and-1 from the Huskie 44, Penny scampered 23 yards to help set up John Baron's 38-yard field goal with just seven seconds left, which gave the Aztecs a 31-14 advantage at intermission.

As quickly as SDSU scored in the first quarter, NIU flashed its big-play capability on the second snap of the third period when Santacaterina found a streaking Spencer Fears, who darted down the sideline in full stride for an 81-yard touchdown reception, which narrowed the gap to 31-21.

Later in the period, the Huskies trimmed the margin to 31-28, as reserve quarterback Marcus Childers scored on a keeper from one yard out to punctuate a 4-play, 60-yard drive.

The two teams traded possessions before the Aztecs tacked on a key 21-yard field goal by Baron with 45 seconds elapsed in the fourth quarter to extend the margin to 34-28. After Penny got SDSU out of the hole with a 25-yard sweep down the right sideline, Chapman hit Collin Andrews for an 11-yard gain, while Washington soon followed with an 11-yard burst to put Baron in range for a chip shot.

Later in the period, the Aztecs punted from deep within their own territory on two occasions, giving NIU the edge in field position. Following the second exchange, the Huskies went for broke on a 1st-and-10 play from the SDSU 20. However, Kameron Kelly extinguished the threat with an interception at the 1-yard line.

A personal-foul penalty on Kelly's 44-yard return placed the ball back at the 30 with 2:28 left in the game, but SDSU was unable to gain a first down and promptly punted to the Huskie 15. Three plays later, Thompson came up huge with his second interception of Santacaterina at the NIU 20 with just 1:42 to go.

In addition to Thompson's heroics, Parker Baldwin posted a team-high 11 tackles, while Kelly finished with nine stops of his own, including seven solo efforts. The Aztec defense also received a boost from Jay Henderson, who contributed four tackles for loss, including a career-best three sacks.

The Aztecs return to Mountain West play at UNLV next Saturday at 7:45 p.m.