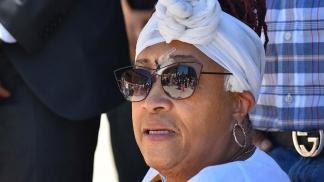 January 8, 2021 (La Mesa) -- San Diego County District Attorney Summer Stephan’s Office announced yesterday that a La Mesa police detective, who fired a beanbag round that injured Leslie Furcron during a protest that turned into a violent riot in La Mesa, will not face state criminal liability for his actions. Read the DA’s detailed review here.

Furcron was struck in the forehead and left blind in one eye after throwing a can toward officers during a confrontation in which others were hurling rocks. She has filed a civil lawsuit against the city of La Mesa over her injury.

On the afternoon of Saturday, May 30, a large number of protesters gathered at the La Mesa Police Department. The D.A.’s press release states, “The initial protest was peaceful. Later, protesters began throwing water bottles, glass bottles and rocks the size of baseballs toward officers and the police station.”

The investigation found that an armored response vehicle was brought into the police station parking lot to make repeated unlawful assembly announcements. Some protesters climbed onto the vehicle, vandalizing it with rocks and paint. Police made multiple announcements for the crowd to disperse and that the protest had transformed into an unlawful assembly, without avail. Chemical agents were deployed in an attempt to push back protesters, but rocks and bottles continued to be thrown at officers.

Windows to the police dispatch center were shattered by thrown rocks and civilian dispatchers requested police assistance. The officers who responded, including La Mesa Police Detective Eric Knudson, were positioned on the patio outside of the dispatch center in order to safeguard the civilian dispatchers and the critical operations. Knudsen and the other officers used a concrete wall as protection from rocks that continued to be thrown at them and the police station.

Flash bang devices and gas canisters were deployed in an ongoing attempt to disperse the crowd. Knudson fired one beanbag round at a protestor who was attempting to throw a gas cannister back at police, which missed the protestor. Knudson saw another protestor, later identified as Furcron, 59, throw an object toward Sheriff’s deputies, who had formed a skirmish line in the parking lot. After Furcron threw the object, Knudson— who was about 96 feet from Furcron— fired a beanbag round at her. Furcron was struck in the head by the beanbag round, fell to the ground and a large crowd gathered around her. Minutes later, people in the crowd moved Furcron to a vehicle on the street and she was transported to the hospital by civilians. Knudson has said that he aimed for Furcron's torso, not her head. Video showed Furcron moving forward as she was struck.

According to the D.A.’s office, “Detective Knudson mistakenly believed Ms. Furcron had thrown a rock. Ms. Furcron threw a can and not a rock, but his belief was not unreasonable given the totality of the circumstances the officers were dealing with, placed in the context of the violent riot taking place at his location, fires set at City Hall, and other information that informed his actions. The fact that Ms. Furcron suffered serious injuries is a tragedy, however, the law and the evidence do not support a finding that Detective Knudsen committed a crime in this case.”

The D.A.’s press release notes further,”What began as peaceful protest turned into a riot, resulting in danger to the civilians in the crowd, civilian dispatchers, the police station, officers and deputies. Some rioters set fires, escalating the overall sense of danger and imminent threat. The DA’s review concluded that amid the violent riot that had broken out and the attacks on Sheriff’s deputies and officers, Knudson was acting in defense of others and himself when he fired the beanbag round. Under the totality of the circumstances and analysis of the law, Knudson therefore bears no state criminal liability for his actions.”

Furcron’s attorney, Dante Pride, blasted the D.A.’s report. He told the San Diego Union Tribune there is “no accountability.” His client, he said, suffered “life-altering damage the D.A. passes off as ‘Oh well, it was a mistake.’ “It makes absolutely no sense to me,” Pride added.

The announcement that Detective Knudson won’t face charges comes in the same week that the D.A. announced criminal charges have been filed against ex-La Mesa Police Officer Matt Dages in an earlier high-profile case.

Dages is charged with falsifying a report against Amaurie Johnson, a black man whose controversial stop at a trolley station went viral in a social media video and has been cited as a factor that sparked the riot two nights later. Officer Dages was fired by the city of La Mesa and charges against Johnson were dropped.

If he was having such difficulty being accurate, then he certainly should NOT have fired. What if he hit someone else who had not even thrown a coke can? There is just too much overwhelming evidence and I could supply the references, that literally in thousands of cases where police have harmed or killed civilians, only a small very small fraction are ever disciplined. I wonder what would have happened if a senior citizen who was white and working as a journalist had been blinded? And the totality of the situation is the history and current status of police violence.

"According to the D.A.’s office, “Detective Knudson mistakenly believed Ms. Furcron had thrown a rock. Ms. Furcron threw a can and not a rock, but his belief was not unreasonable given the totality of the circumstances the officers were dealing with . . .Knudson has said that he aimed for Furcron's torso, not her head. Video showed Furcron moving forward as she was struck.."

If Knudson believed she threw a rock and then raised her arm as if to throw again, then and only then should he have fired to prevent her actions. Based on the DAs evaluation, citizens are vulnerable to any misinterpretation by police. While I agree that police have the right and rsponsibility to prevent actions that could harm others, at the same time, they have the responsibility to do their best to not overreact. In addition, my dad took me to the police fire range when I was a child. Even then my aim could easily have hit a torso, not someone's head. Aren't La Mesa police officers required to be certified in weapons use? A torso is a large target. How could he miss?

Just one of thousands of examples of how "the benefit of the doubt", how police officers, allegedly well-trained and screened, lack culpability.

While I have known many good police officers during my life, I am sometimes more afraid of law enforcement than criminal elements. I remember protesting Vietnam War and the violent acts of police, something that continues unabaited. Even if 95% of police officers are conscientious, there to do their best to protect us, it only takes a few to put all of us at risk, especially when they face little to no repercussions.

tell me even an experienced marksman would have trouble being accurate that far away especially aiming at a moving target.  It was getting dark and there was tear gas or pepper spray in the air further obscuring visibility in some areas around the polce station.  I am not excusing what happened but just pointing out the totality of the attacks.