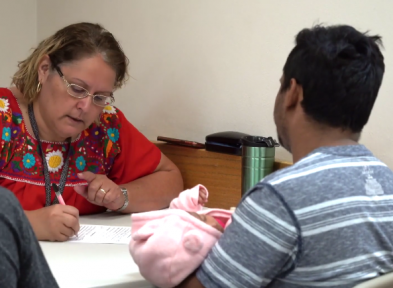 By Miriam Raftery
June 16, 2019 (San Diego) – The flu outbreak in San Diego among migrants seeking asylum appears to be waning.  No new flu cases were diagnosed among the 35 new migrants screened at the county shelter on Sunday, June 16th, says Michelle Mowad, communications specialist with the county.
Currently there are no remaining migrants quarantined in hotels and none in hospitals, all positive signs.
Since May 19th, 231 cases of influenza-like illness have been diagnosed among the asylum seekers sent to San Diego from Texas by the federal government.
All of the asylum seekers arriving in San Diego have received medical screenings when they entered the shelter, as well as treatment as needed. Those with flu symptoms have been isolated in hotel rooms along with their family members,  who are also given treatment to prevent them from becoming ill or spreading the virus.
County and migrant center medical staff visited patients daily in their hotel rooms to monitor their symptoms, address any medical needs and determine when they were well enough to travel.
Newly arrived migrants at the shelter have also received treatment, even if they have no flu symptoms, to help prevent the outbreak from recurring.
Since those with flu and their family members were quarantined until they recovered, the outbreak did not pose a threat to the public.
After leaving the local shelter, the migrants have gone on to rejoin relatives in the U.S. while awaiting hearings to determine whether or not they will be granted asylum to stay in the U.S., or face deportation. The vast majority have walked from Central America to the U.S. fleeing violence in their homelands.

Sympathy and compassion............latest lawbreakers now have less communicable disease than former......Receive Medical screenings, hotel rooms, and given necessary meals etc. They then get a bus, airfare or free transportation by ICE to different parts of my country. The picture on this headline is heart warming.........a young male with a baby. Fact is, all the pictures of the invasion forces from the media show what I perceive, 90% males and the rest women and children. Tell me why I should like about this.

on how many are male, female, or have children.  But people I know who go to Mexico a lot have said there are a lot of children waiting down there.  It is an interesting question; I'll try to research and see if I can find out anything conclusive and if so, will publish.