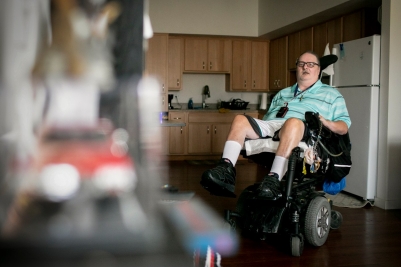 Photo:  Bradley Fisher, 62, in the Antioch home he eventually moved into after spending 14 years in a Bay Area nursing home. Sept. 2, 2021. Photo by Anne Wernikoff, CalMatters

Entering at age 39, Fisher had been partially paralyzed when bone spurs severed tendons in his spine. After a few years of rehabilitation, Fisher said, he could have lived at home with proper care.

“You don’t need to be here,” Fisher remembers a certified nursing assistant telling him around 2005, seven years in, as he sat in his wheelchair in the facility’s cafeteria. “You got all your faculties.” 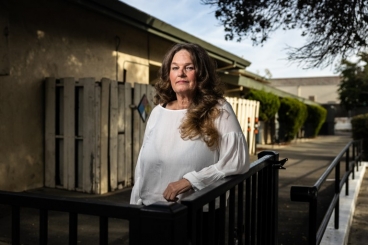 Photo, right:  Karen Stuckey has spent the past 11 years moving poor seniors back into the community from nursing homes, such as San Pablo Healthcare & Wellness Center. Nov. 4, 2021. Photo by Martin do Nascimento, CalMatters
After a week in the hospital, Steele was discharged to an area nursing home.
There, Medicare covered Steele’s bill — but only for the first 20 days. After that, Medicare reduced its payment to 80% and Steele, like all nursing home residents, was responsible for the remainder – which can reach $5,000 a month.
Already short on funds, Steele qualified for Medi-Cal, the state’s low-income insurance, which picked up the 20% copayment. After three months of rehabilitation, a patient’s status becomes long-term care and Medicare stops paying altogether; now Medi-Cal foots the entire bill.
But Medi-Cal, the ostensibly free insurance, has a price. Once in long-term care, every cent of a nursing home resident’s Social Security Income, save for a $35 monthly allowance, is taken to help pay for the daily costs of living in the nursing home, such as food, housing and utilities.
Steele couldn’t pay rent for space to park his car on $35 a month. Eventually, his Volkswagen was towed, along with all his belongings, to pay off the rental debt.
“I lost everything,” he said.
Failure to pay rent is the leading reason nursing home residents lose their housing, according to several transition organizations.
By July 2020, the nursing home’s social worker linked Steele with a transition program called LIFE Incorporated in Camarillo, north of Los Angeles. But as preparations began to move him, medical dividers were raised in the facility’s hallways, staff donned PPE suits, and bodies were carried past him in blue bags.
“I was tempted to run,” Steele said. “I was trapped there and the COVID was coming to get me.”
Just before that Christmas of 2020, he was infected with the virus. On Christmas Day, his adult children called, but he couldn’t bring himself to tell them his diagnosis. That evening, the staff gave him peppermints and a Christmas card.
Steele, now 64, survived and was moved to an apartment in Oxnard a few months later. Though he’s thankful to be outside the facility, his life’s belongings are gone.
“When I left the (facility) I didn’t have anything anymore,” he said, “I don’t have anything now.”
No penalty for transition failures
In California, the Department of Public Health does not regulate how quickly a facility should refer a resident to a transition program. And it doesn’t cite or fine a home for failing to refer.
In 2020, two-thirds of California residents’ requests weren’t referred at all, according to federal data.
“The obligation to make the referral is explicit,” said Bagby, referring to the mandatory survey. But without a state regulation spelling out a timetable, she said, “the state can’t sanction facilities that don’t make the referral.”
Representatives of several California transition programs said the lack of consequences leaves residents at the whim of nursing homes.
A 2016 report by the U.S. Health and Human Services’ Office of Civil Rights found that most nursing homes “never ask, or nearly never ask” residents the question about their rights and living options. The federal investigation concluded that nursing staff weren’t properly trained and misinterpreted the quarterly survey’s instructions.
The agency recommended that nursing homes invite California Community Transition programs to present to residents and staff every six months.
Representatives of eight transition programs in California, which cover more than 700 nursing homes, told CalMatters that only three facilities had ever requested a presentation.
DeAnn Walters, a former nursing home administrator who is now at the California Association of Health Facilities, said she doesn’t recall the federal report and recommendations.
The California Department of Public Health, which routinely issues “All Facilities Letters” about new requirements or regulatory changes, did not address the report’s findings and recommendations.
In its unsigned email response to CalMatters, the department wrote: “Recommendations by any entity do not mandate the issuing of an All Facility Letter.”
Advocates worry it can be a conflict of interest for nursing homes to be responsible for referring residents out of their facilities.
A Medicare resident brings a facility substantially more in federal money than the state provides through its Medi-Cal program for low-income Californians.  To even be eligible for transition services, a resident must qualify for Medi-Cal.
Once nursing homes understand that California Community Transitions won’t likely move their more lucrative Medicare patients, said Stuckey, “They love what we do, and they want to refer.”
Jules Boddie, a 69-year-old retired state clerk who entered a Sacramento nursing home in 2018, said he lost his housing while awaiting transition help. 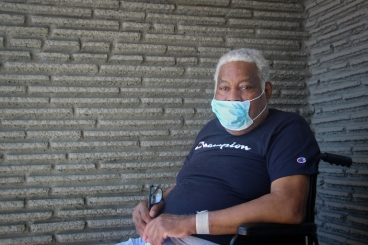 Photo, left:  Jules Boddie, 69, outside the Sacramento nursing home where he spent nearly three years. Last summer, he was able to move into community housing. Photo by Jesse Bedayn, CalMatters
“It’s just like being put in a box and forgotten,” he said.
Boddie said he repeatedly asked for help returning home but waited more than a year and a half before getting any assistance.
The facility’s former director of nursing told CalMatters that, to her knowledge, Boddie never relayed such requests to staff. She produced quarterly assessments showing that Boddie had declined offers to receive help moving out.
Boddie, who is on Medi-Cal, said he has no memory of this.
But help eventually came. In the fall of 2020, he said, a new social worker came on board and quickly referred him to Choice in Aging, which placed him on a waitlist for affordable housing.
One week before Boddie moved into temporary housing, he was infected with COVID-19. As he gasped for air in the hospital, his new room was given to the next person on the waitlist.
He said he cautioned other residents: “You have a life outside the nursing home. Don’t give up on it.”
He was moved out of the facility and into shared housing in Sacramento on July 30.
‘The most peaceful I’ve ever been’
Even with the urgency of a pandemic, transitioning just one resident takes seven months on average, the Department of Health Care Services told CalMatters. Transition program workers say they face a gantlet of state regulations, reams of paperwork and affordable housing waitlists that can stretch five years.
“It’s such a process,” said Stuckey, “that unless they already have housing, we really have no control over it.”
The U.S. Supreme Court determined that, for patients hoping to transition, states must provide enough affordable housing so the waiting lists move at a “reasonable” pace.
The Department of Housing and Urban Development recommends states keep wait times below two years, but in California, the average wait time is more than 2 ½  years.
The governor’s Master Plan for Aging, released in January 2021, includes initiatives to expand affordable housing for seniors with $250 million in proposed funding. That could shorten waitlists for nursing home residents who’ve lost their housing.
Funding for Money Follows the Person ended in 2018, and Congress has passed five short-term extensions. The latest will keep the program running until 2027.
With funding shaky, nationwide transitions between 2018 and 2019 plummeted to 5,000, dropping below 10,000 for the first time since 2012. California reduced its transitions to under half of its 2014-2016 transitions, according to a 2020 report by the Community Living Policy Center.
Last year, the California Department of Health Care Services received a $5 million federal grant to help identify nursing home residents eligible to transition, like Bradley Fisher.
Over Fisher’s 14 years in the Bay Area facility, staff never asked him if he wanted to move out, he said, and did not inform him of his civil right to do so. The facility’s administrator told CalMatters in an email that records of Fisher’s quarterly surveys aren’t available. 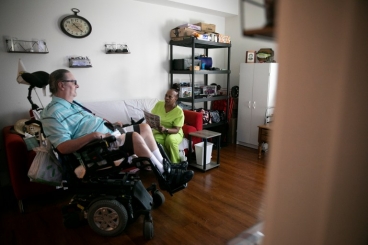 Photo, right:  Bradley Fisher watches television with his caretaker, Carol Small, at his Antioch apartment nearly a decade after leaving the nursing home where he had lived for 14 years. Sept. 2, 2021. Photo by Anne Wernikoff, CalMatters
Fisher said he began taking antidepressants while inside the home.
“I felt like I was stuck,” he said. “I even thought that playing bingo would get me out of this funk, but it never did. Nothing would.”
In 2012, a fellow resident told Fisher about a woman named Karen Stuckey, who was organizing that resident’s move out of the nursing home.
“She can get you out, too,” Fisher remembers him saying.
Months later, Fisher was moved to a shared apartment in Antioch. Initially rocked by anxiety after leaving his home of 14 years – and hospitalized twice with panic attacks — Fisher stuck it out.
“It’s the most peaceful I’ve ever been,” he said. ”I feel like a knot in my gut has been removed.”
This story originated with the Investigative Reporting Program at UC Berkeley, with SCAN Foundation funding.