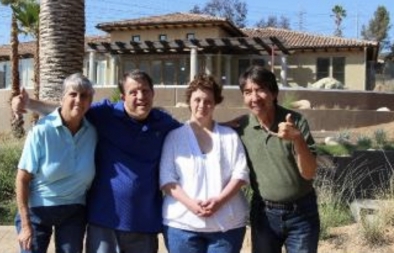 “I am happy to share that the California Department of Developmental Services just announced Noah Homes’ reimbursement rate – and all other large home providers across the state – is being increased to better align with the actual costs of care. The change is retroactive…” --Molly Nocon, CEO Noah Homes

The state announced a new funding formula earlier this year that unfairly penalized residential facilities housing seven or more individuals and threatened to force Noah Homes in Spring Valley to evict 40 percent of the residents it houses, all with intellectual and development disabilities (I/DD).

The funding model that was announced adverselyimpacted the housing availability and quality of housing choices for adults with developmental disabilities such as autism and Down syndrome across California. Under the funding model announced earlier this year, housing providers with six or fewer beds would get an increase in their reimbursement rate whereas facilities with seven or more individuals, like Noah Homes, would have their funding frozen at older reimbursement rates. 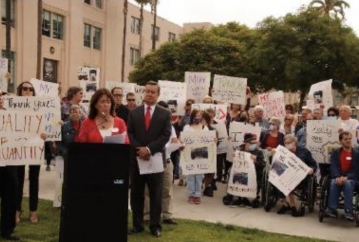 In response to the restrictive funding formula that was announced earlier this year, approximately 100 people attended a press conference on June 14 in the Civic Green at Waterfront Park with Chairman Nathan Fletcher and Supervisor Joel Anderson to show unity with Noah Homes and call on the County Supervisors, the state’s Department of Developmental Services (DDS), the California Budget Committee and the Governor to support housing and services for adults with intellectual and developmental disabilities.

East County Magazine covered and reported on the event: https://www.eastcountymagazine.org/supervisors-anderson-and-fletcher-ask-state-boost-funds-noah-homes-save-housing-intellectualy-and

Both Supervisors Fletcher and Anderson joined forces in unity to voice support of Noah Homes and presented a motion to the Board of Supervisors to request modification to the State’s reimbursement rates for all housing and services provides for adults with intellectual and developmental disabilities (I/DD).

The motion was unanimously approved by the Board of Supervisors and directed the Chief Administrative Officer to include in the Board’s legislative program support for State legislation and/or administrative actions that would adjust reimbursement rates in order to sustain operations and/or funding for Regional Centers and Community Care Facilities (CCFs) that serve persons with I/DD.

The action also directed the Chief Administrative Officer to write a letter to the Director of DDS and Secretary of California Health and Human Services (CalHHS), with a resolution, requesting increased funding for Regional Centers and all models of CCFs that serve persons with I/DD.

The collective efforts were heard and the Department of Developmental Services announced even newer and more simplified reimbursement rates on September 20 that restores funding to Noah Homes and all Communal Care Facilities that serve people with developmental disabilities.

“I am happy to share that the California Department of Developmental Services (DDS) just announced Noah Homes’ reimbursement rate – and all other large home providers across the state – is being increased to better align with the actual costs of care. The change is retroactive, restoring our funding starting April 1, 2022. This means our projected deficit this year will decrease from $2 million to less than $1 million,” stated Molly Nocon, CEO Noah Homes 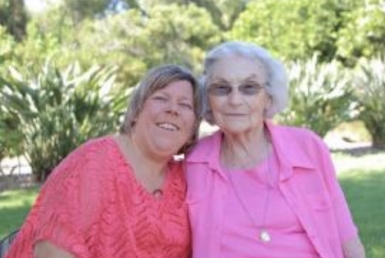 “After months of meetings and discussions around the lack of a rate increases for homes larger than six beds, the Department of Developmental Services (DDS) announced a revision to the rates yesterday that brought all residential providers under a simplified two-tiered reimbursement schedule that covers providers based under rates for providers with 4 beds or less and 5 beds or more,” continued Nocon. “All residential providers will now fall into one of these two categories and receive an increase retroactive to April 1, 2022.”

Asked who championed the effort to restore funding, Sharla Lane, Director of Communications for Noah Homes responded, “Lots of people! Noah Homes, the San Diego Regional Center, the San Diego County Supervisors, and other organizations across the state like Cedars of Marin and The Arc of California.”

Nocon added, “Noah Homes has always benefitted from an active relationship with DDS, as seen in the development of the first Memory Care Homes in California, and in our continued work with other community organizations to provide more desperately needed homes to those with Alzheimer's. Noah Homes is grateful for the outpouring of community support in these trying times. Your voice, letters, telephone calls and emails were so important in this process, as it made legislators on local, state and federal levels aware of the critical lack of housing choices, and the need for more collaboration among state and local agencies. Our population needs a place at the table for low-income housing and other affordable community settings.”

“Noah Homes is a residential care facility in Spring Valley that offers a caring, community-based housing model for adults with intellectual and developmental disabilities that allows them to live in a community of folks with similar disabilities,” said Jenn Moss, HR Manager for Noah Homes. “They live with us full time and the services we provide are very important to dementia care. What our residents really enjoy and appreciate is that they live together, in large homes.”

Moss concluded, “Everyone has a single or double room, but they live in a larger home together, so they can live together, and eat together, and share life together-- and that’s what our residents really enjoy, appreciate and embrace,”