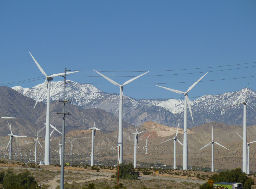 June 24, 2012 (Washington D.C.) – A scathing new report  by the U.S. Department of Interior’s Inspector General highlights “significant failures” by the federal Bureau of Land Managment  in its stewardship over  more than 30,000 wind energy right-of-way (ROW) acres and another 31,000 acres of solar energy ROW  sites.  View the complete report at http://docs.wind-watch.org/BLM-Renewable-Energy-Program.pdf.
In addition, the report exposed “weakness in financial accountability and resource protection including obligations to protect the Government’s financial interest by collecting rental revenues, managing the bond process, and by appropriate monitoring and enforcing ROW requirements.”
The BLM is poised to add another 21 million acres identified with wind energy development potential and over 20 million acres for potential solar energy facilities, raising serious concerns over enforcement of mitigation requirements for impacts on public lands.
In Palm Springs the BLM failed to adequately bond four wind projects, including one with 460 turbines “leaving BLM at risk to future liabilities for land reclamation and the potential damage to natural resources,” the report stated.
The report is damning when it comes to BLM enforcement of  mitigation requirements.
“Our review of wind project files revealed very little inspection documentation for wind projects and no monitoring plans,” the report found. “One BLM field manager told us that wind projects `run themselvs’ and do not have many issues requiring monitoring. 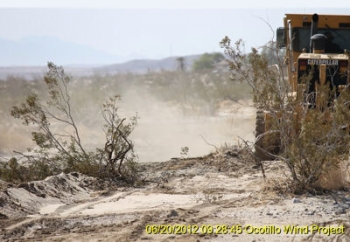 In Ocotillo, where the Ocotillo Express wind project is under construction, residents have repeatedly complained about a lack of BLM monitors and have documented numerous problems on video and with photos, ECM has learned.  These include lack of adequate dust controls (which eventually led to enforcement action by Imperial Valley’s air pollution control board, after citizen complaints), apparent violations of water use agreements and failure to obtain permits from the Army Corps of Engineers before drastically altering drainage in the area.
The federal report concluded from its fieldwork that “continued monitoring is important to ensure the project site is properly maintained and safe.” Monitoring activities can identify incidents such as collapsed wind turbines, bird deaths, damage from fallen meteorological towers, and oil leaks from hydraulic systems. 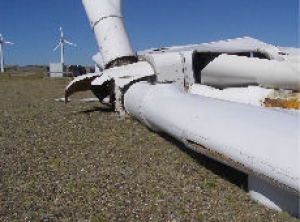 The Interior Department’s inspectors found an unreported collapsed wind turbine at a BLM wind project in Wyoming in 2010. The BLM learned of the collapse only after photos were posted on Facebook.  The ownership of the project had changed hands and new owners claimed they were unaware of reporting requirements.
Collapse was found to be due to a hydraulic system failure during a power outage, combined with high winds that overstressed the turbine.  Leakage was caused by a faulty O-ring.  Earlier inspection might have identified the leak and prevented collapse of the multi-ton turbine.
The report further criticized the BLM for using third-party contracting for monitoring with no controls or oversight, as well as using a non-competitive bidding process, further costing taxpayers money.
The report made numerous recommendations for improvement.
It also includes contact information for the public to report fraud, waste and mismanagement to the Inspector General’s staff at the Department of the Interior: Visit www.doioig.gov
Call the 24-hour free number to report waste, fraud and abuse at 800-424-5081
Send a report by fax to 703-487-5402
File a report by mail with the U.S. Dept. of Interior, Office of Inspector General, Mail Stop  4428 MIB, 1849 C St. NW, Washington DC 20240.
The report by the DOI Inspector General is very appropriate as well:
http://www.windaction.org/documents/35216
The IG evaluated significant failings of the BLM in monitoring wind and solar rights of way granted developers.

BLM have proven time and time again that they are not a very good land mgmt agency and yet they're given important duties like determining fate of public lands, wildlife, wild horses & burros. President Obama: it's long past time to get Salazar out of DOI! Congress: it's long past time to set up an agency that understands they work for the public, NOT the ranchers, mining companies, oil/gas, or solar/wind companies. Why has Congress let this mess continue for so long? Time to send BLM out to pasture with the welfare livestock they love so much.

Disturbing to say the least, Miriam. Bad enough that these bogus "clean" energy wind farms are built in the

first place destroying, as they do, thousands of acres of wilderness. But allowing the proverbial fox to guard