Public has until July 18 to submit comments 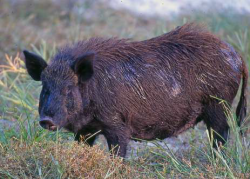 June 24, 2012 (San Diego)--Cleveland National Forest (CNF) and the Bureau of Land Management (BLM) have released an Environmental Assessment (EA) for feral pig management on public lands in San Diego, Riverside and Orange Counties, as well as on the Capitan Grande Indian Reservation.

Feral pigs, which are not native to our region, have caused extensive damage by rooting that destroys riparian waterways, habitat and forage for wildlife. The plan includes 600,000 acres of public lands, including many in East County.

The federal government proposes to completely eradicate the pigs through hunting with helicopters and tracking with dogs, as well as trapping. Pigs would be live trapped in humane traps, then shot. 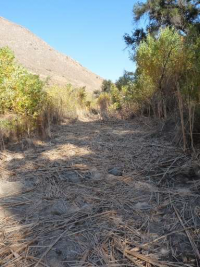 The plan would cost an estimated several million dollars to implement.

Some animal rights supporters have objected to killing the pigs as inhumane and have asked that other options, such as fencing or live removal, be considered.

“No animal should be killed simply because they are trying to survive,” said Stephanie Bell, national director of cruelty investigations for PETA, which opposes killing the feral pigs.

She added, “If lethal measures are insisted upon, live trapping and euthanasia would be far less cruel than aerial hunting or using dogs.”  Aerial hunting can leave wounded animals to die a slow and agonizing death, she said, while packs of dogs can attack the pigs brutally, also risking fatal injuries to the dogs.

Other objections included concerns that aerial marksmen would eliminate opportunities for hunters. Still others sought to have meat from pigs not be wasted, however difficulty of access and removing carcasses poses an obstacle.

The Environmental Assessment is available at http://www.fs.fed.us/nepa/fs-usda-pop.php/?project=33902. 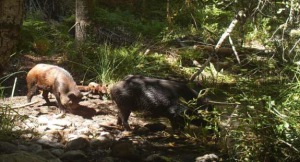 For more information about the project or to request a hard copy of the Environmental Assessment you can email FeralPigComments@fs.fed.us or call 619-445-6235 ext 3457.

Why spend millions of dollars for professional hunters when the county could issue hunting permits, make a little money (instead) and fill countless private freezers around the county with delicious pork shanks?