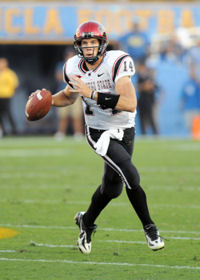 By Hunter Hewitt
June 25, 2012 (San Diego's East County) -- When the time comes for a high school football star to decide on which college to attend, it can be extremely tough to make a decision. These young men often find themselves weighing their options and strongly considering each school that has offered them a scholarship.
For Ryan Lindley, however, the decision was simple.
A native of Alpine, Calif., Lindley thoroughly enjoyed his upbringing in East County. From his early years at Alpine Elementary School to his young teenage years at Joan MacQueen Middle School, Lindley loved growing up in San Diego.
“It was a great place to grow up in and I really liked the small-town feel,” Lindley said. “I liked being 30 minutes or so from downtown San Diego and the beaches. I’m also a big fan of the Lakeside Rodeo.”
After his junior year at El Capitan High School, several colleges expressed interest in the young quarterback. When nearby San Diego State extended a scholarship offer to play football at the next level, it was a no-brainer for Lindley to accept.
“Being a hometown kid from San Diego, it was an easy decision for me,” Lindley said. “I had a great time growing up in East County and that made me want to stay true to my roots.”
Lindley went on to have a stellar career at SDSU. He was a four-year starter, and led the Aztecs to a postseason bowl game in each of his final two seasons, breaking several all-time passing records in the process. Most notably, Lindley is now the all-time leader in passing yards, completions, and touchdown passes at SDSU.
Lindley’s collegiate career not only impressed his hometown fans, but also caught the eyes of numerous NFL scouts. In April, Lindley saw his childhood dream come true when the Arizona Cardinals selected him in the sixth round of the 2012 NFL Draft.
For now, Lindley is busy with a grueling offseason program consisting of organized team activities (OTA’s) and workouts with his new team.
“Right now we just finished up with a minicamp and I’ll be in Arizona until July,” Lindley said. “Then I get three weeks off and we come back July 23 for training camp.”
Lindley says he is currently focusing on short-term goals that he knows he can control, such as improving every day and mastering a new playbook. As for long-term NFL goals, Lindley wants to eventually become a starting quarterback.
“In the long run I want to play and be the starter,” Lindey said. “But for now the biggest thing is focusing on what I can do each day to get better. I don’t want to get too far ahead of myself.”
Now, when Lindley has a few weeks off in the beginning of July, he’ll have another decision to make. He can stay in Arizona or drive eastbound on Interstate 8 all the way back to Alpine.
“I’ll be heading back home for my time off,” Lindley said.
Once again, it’s a simple decision.