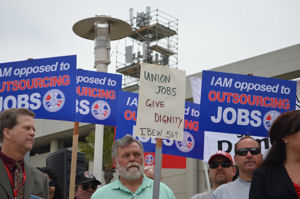 By Nadin Abbott
Photos Nadin Abbott
Conference sparks protests over proposed new free trade pact
July 2, 2012 (San Diego) -- The 13th round of negotiations for the TransPacific Trade Negotiations (TPP) is being held in San Diego at the Bayfront Hilton Hotel. This treaty will expand free trade across the Pacific Rim.
The proposal is supported by business groups, but has drawn sharp criticism from labor, health experts and other groups.
What is a free trade agreement? According to Professor Hisham Foad of the San Diego State University Economics Department "A free trade agreement is a treaty between two or more countries covering how trade in goods and services will be treated. In its simplest form, imported goods are treated identically to domestically produced goods within the free trade zone." As Foad pointed out in an e-mail to ECM, ideally this leads to the closest possible trade conditions among partners, leveling competition and trade between nations.

There are winners and losers in free trade agreements, but the major winners, according to Foad, are consumers, who have access to cheaper goods.
Opponents contend that past free trade agreements have led to the offshoring of U.S. jobs overseas. Critics also note that U.S. firms have difficulty competing against foreign companies when free trade pacts fail to require protections for workers and the environment for goods made overseas. In addition, arbitration in non-U.S. courts could take away key protections here in America.
Negotiations for this trade agreement started as a small trade area in the Pacific. According to Foad, the current nations involved in negotiations are "U.S., Australia, Brunei, Chile, Japan, Malaysia, Mexico, New Zealand, Peru, Singapore, and Vietnam. The U.S. already has free trade agreements with Australia, Canada, Chile, Mexico, Peru, and Singapore. Japan is not formally negotiating the agreement and is unlikely to be a part of it any time soon."
The expansion of free trade across the Pacific rim would create a very large trading area, that could rival the European Union. This, in theory, will create a wide trade area that will benefit consumers across the trade zone. It could also lead to cheaper
prices that will benefit the consumer.
The U.S. Chamber of Commerce pointed out that one in three manufacturing  jobs depend on trade. Also, U.S factories have nearly doubled their output. U.S. exports account for less than 10 percent of GDP, but we export 45% of our exports to our free trade partners.
On the other hand, Michael E. Dolan, of the Teamsters said that the union is "looking forward to support the TPP, if, and only if it contains a strong labor protection in the core of the text…enforceable through the same or superior dispute mechanism as the Financial rules."
In other words, the Teamsters union is ready to support only a treaty that will. "protect workers rights and their right to organize." 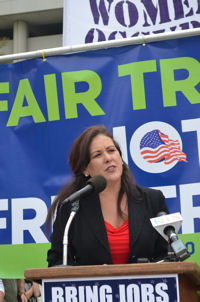 This was echoed in a rally organized by the San Diego and Imperial Labor Council and community organizers. Lorena Gonzales did not mince words when she emphasized that the Council is for "good American jobs, which have shifted overseas to sweat shops." Gonzales also emphasized that this was a broad coalition around this TTP negotiation and we need to keep the pressure on."
Bob Filner, Congressman and candidate for Mayor of San Diego, reminded the audience that one of his first votes was against the North American Free Trade Agreement (NAFTA).  He also emphasized that there were "600 Corporate lawyers inside, but none from the people."
Filner reminded the assembled audience coming from Occupy, labor and community organizations, that one promise of NAFTA was that it was going to raise the standard of living in both countries. This has not happened in either Mexico or the United States, he observed..
He was emphatic when he added that "NAFTA made the world safe for corporate interests." Filner finished by stating that "we love trade, we want it to be fair."
Arthur Stamoulis, Citizens Trade Campaign, told the audience, "We have seen half a million good paying jobs shifted” and that “600 corporate lawyers have access to the text." In the end, once Americans learn of this, they will demand change, he stated. He added that the companies want people to pay more for drugs, since the treaty will expand copyright for trademarks.
Access to the document by elected officials
One of the repeated charges made by critics was that the body of the trade agerement’s text was not available to our elected officials. When Senator Wyden (D-OR) requested access to the document, he was denied access. Subsequently he took to the Senate, where he said in part:
"It may be the U.S. Trade Representative’s (USTR) current job to negotiate trade agreements on behalf of the United States, but Article 1 Section 8 of the U.S. Constitution gives Congress – not the USTR or any other member of the Executive Branch – the responsibility of regulating foreign commerce.  It was our Founding Fathers’ intention to ensure that the laws and policies that govern the American people take into account the interests of all the American people, not just a privileged few.
And yet, Mr. President, the majority of Congress is being kept in the dark as to the substance of the TPP negotiations, while representatives of U.S. corporations – like Halliburton, Chevron, PHRMA, Comcast, and the Motion Picture Association of America – are being consulted and made privy to details of the agreement.  As the Office of the USTR will tell you, the President gives it broad power to keep information about the trade policies it advances and negotiates, secret.  Let me tell you, the USTR is making full use of this authority."
http://www.wyden.senate.gov/news/blog/post/iycmi-wyden-statement-introducing-congressional-oversight-over-trade-negotiations-act
In a letter, dated May 1, Senate members also demand this access, as well as flexibility. This letter is bipartisan and was signed by Senator Dianne Feinstein (CA-D). In the letter these proposals claim that "the framework we outline...will enable U.S. Negotiators to achieve the highest standard TTP agreement."
According to Public Citizen, Democrats are escalating their criticism of the TTP agreement.
The chief complaint is the secrecy in which this negotiation is being conducted. There is concern that "TTP proposals that replicate past pacts and could increase drug prices undermine Buy American Policy and expose U.S., laws to attacks in foreign tribunals."
The message from his party is clear to the President: "Neither the public nor members of Congress will tolerate more of these NAFTA-style trade agreements."
A possible public health effect of TPP on smoking and smoke free areas 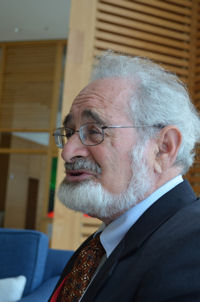 According to Stanton A. Glantz of the University of California School of Medicine, and Director of the Center for Tobacco Control, the Tobacco Framework Convention is working. "Countries have done what is required." This could all be undone by this trade pact. Simply the Tobacco industry could take states to arbitration.
This arbitration mechanism allows corporations to take governments to third party arbitration bodies that decide this case. It takes this outside of our own courts. 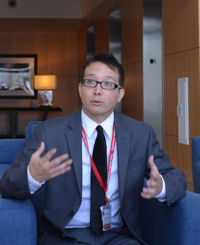 According to Timothy Ken McKey, UCSD Doctoral Student, this could have two effects in San Diego. Any legislation we pass to deal with cigarette butts polluting our beaches, or regulation stating how long a lit cigarette can burn, can land the county in expensive arbitration. Given lit cigarettes are responsible for at times disastrous fires in the back country, this could be a problem.

An easy solution, according to Gantz, is to simply exclude tobacco from these mechanisms, in clear language.  If tobacco companies get any standing through TPP,  they will use this to reverse any advances in public health and take flexibility away, the UCSD medical expert warned.

Anytime negotiations are done in secret, it spells TROUBLE.

As the article states, the arbitration process will allow multinationals to break the laws of a country if they win in arbitration. Arbitration courts will be in favor of the big corporations since they have the money to do what they want. Around the world, corporations will become stronger than individual governments.......at the expense of the rights of the people and independent law.

Multinational corporations are a cancer affecting the global economy.