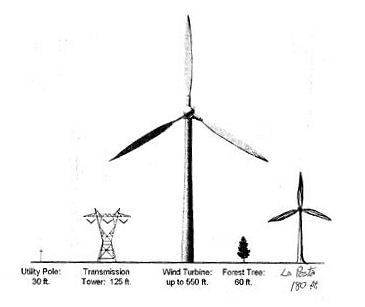 By Miriam Raftery
July 14, 2012 (Washington D.C.) –Efforts by the wind industry to amend the Small Business Jobs and Tax Relief Act (S. 2237) have failed. The industry had sought to insert  language to extend until 2014 the wind production tax credits set to expire at year’s end .Those credits allow wind developers to write off 2.2 cents of every kilowatt-hour produced. The proposed amendment would also have extended an investment tax credit covering 30 percent of costs for a wind development.

Several prior efforts to extend the renewable energy tax credits have also failed.  Republicans have typically opposed credits for renewables, while Democrats have sought to pay for renewable tax credits by ending some existing credits for the oil industry.
The Senate voted to end debate, invoking cloture and thus enabling  the Small Business Jobs and Tax Relief Act to be brought up for a vote by the full Senate—without the extension of tax credits for wind projects.
Wind industry insiders have voiced high hopes that tax credits will ultimately be extended after the November elections by a lame duck Congress.
Opponents of industrial wind contend that extension should be rejected amid growing  concerns over the negative impacts of wind turbines on health and the environment, questions over the viability of some massive wind projects, and  inadequate oversight of wind energy projects on federal lands.

Well, as one of the grandaddys of the left, Robespierre, once said in a phrase that's been paraphrased by nearly every prominent leftist since, "You can't make an omelet without breaking eggs."

Then it was human lives. Now, with Obama and crew, it's many hundreds of thousands of wilderness acres, and the flora and fauna that live there.

In their world, the end justifies the means; maintaining the "vision"--the utopian ideal--no matter the cost.

The massive destruction wrecked by these "wind farms" will stand as one of the administration's most disgraceful legacies.

Who in their right mind would ever want to reward this industry with tax credits? This would make as much sense as giving Charles Manson a new trial. The public across America is finally getting the message. They will not put up with the lies coming from USFWS and the Wind Industry’s 28 year avian mortality cover-up, for much longer. Golden Eagles have been killed by the thousands from wind turbines, Bald eagles are next and now there is more dismal news coming out about the Whooping Cranes. In 2012, even with the new USFWS flawed/exaggerated survey methods, they are claiming that only 245 Whooping Cranes remain in the Central Flyway population. The real population number is now probably less than 200 because they only counted 192 in Texas this year. When you add last spring's population numbers to the offspring that left with them from Canada, The mortality numbers are devastating for this species. Over the last 6 years the Central Flyway Whooping Cranes numbers have declined proportionately with the explosion of the wind industry in their migration corridor. A hundred lost this year? One third of the population? You had better believe it because in the next 3-5 years we are now looking at the end of the free flying Whooping Cranes. Despite captive breeding pumping up their numbers and decades of population growth, this population has been on the decline since 2006. I looked over the Whooping Crane migration route in just the US. This is how bad it is for this endangered species. In South Dakota, North Dakota, Nebraska, Kansas, Oklahoma, and Texas there are now over 16,500 MW of installed wind energy capacity. At 2 MW per turbine, this means that over 8,000 wind turbines are installed in the central flyway. But the average turbine is probably closer to 1.5 MW which would bring the total to over 11,000 wind turbines. In 2006 when the population decline began for the Whooping Crane, the installed wind energy capacity for the entire US was approximately 16,500 MW. At that time, the six states mentioned in the Central Flyway had 3600 MW of installed capacity, most of it(2700 MW) being in Texas. Since then the wind industry has grown over 450% in the Central Flyway and now there is more installed wind energy capacity in just these six states then there was in the entire US, at the end of 2006. Now if readers can wrap their heads around this..........Another 136,700 MW of wind projects are planned for these six states. This would bring the total to over 150,000 MW. If the Wind industry has their way, the Central Flyway located in the United States, will soon have over 100,000 turbines. At this point there will be over 2.5 trillion cubic feet of deadly rotor sweep waiting for the whooping Cranes each spring and fall when they migrate. Since their population decline began, several hundred Whopping Cranes have turned up missing and are unaccounted for.  Only a few of the bodies have ever been officially recovered. None have ever been reported killed at a wind farm, even though the biggest mortality threat to this species, is the propeller style wind turbine. But if you ask the industry, their wind turbines are not a threat to the whooping Cranes and they have the research and experts to back it up. The reality is that the wind industry has been hiding bodies for decades so they could expand with little resistance. Hundreds of these cranes have disappeared in recent years. Now because of this fraud, the Whooping Crane is one of many species in a steep decline from the insidious development of wind energy. If the public wanted to get to the bottom of all this in a hurry, at least a million dollar reward should be posted for information about these endangered species being found dead at wind farms. Wind industry personnel, even with their gag orders, would start talking. Then at last, we can finally put this terrible corporate lie to rest and move forward, because the mass killing propeller style wind turbine, is really a monster cloaked in “Green” propaganda.