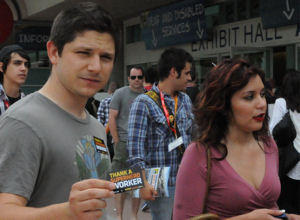 By Nadin Abbott
Photos by Tom Abbott
July 13, 2012 (San Diego)--  Local labor leaders organized a thank a superhero worker event for Comic-Con International. Sandy Naranjo and Ben Cisneros of the San Diego and Imperial Counties Labor Council came to the front of the convention to ask attendees to celebrate labor, as well as pop culture.
Workers were excited to receive appreciation for their labors--and for people to be reminded that it takes a lot of work behind the scenes to make an event like Comic-Con International run smoothly.
These workers ranged from the janitorial staff at the convention to the waiters and waitresses at restaurants, as well as hotel workers. They included police officers that guard crossings, transit security that make sure things run smoothly, and train drivers. Also included were Pedi-cab drivers as well as taxi drivers, people you might not think about. It takes an army of workers to ensure that an army of attendees has fun.
Attendees also thanked the workers warmly and received the message: that all workers, “union and non union count.” After all, as Naranjo put it, “work connects us all.”
This campaign also came with a social media blitz, to thank workers. So if you are on Twitter, #thankaworker today.
The Labor council is also aware that Comic-Con is one of the largest events in San Diego, and the country, this week. The event had political overtones in an era when workers have often been under attack with calls for shrinking wages and pensions.

Those people who make sure the Con runs are super-heroes, “who deserve a living wage, not to be pushed to minimum wage,” labor leaders maintained.