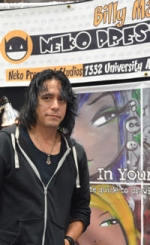 July 15, 2012 (San Diego) -- Comic book authors and artists from East County and across our region were among the throngs seeking to meet fans, sell their works, and attend the esteemed Iesner Awards.
Billy Martinez is a local artist from La Mesa. Owner of Neko Press http://www.nekopresscomics.com/index.shtml  , he also runs an art school, which started in 1993.
Martinez is both self taught and trained. He started drawing at six years old and has been in the field for twenty years. He has drawn for hot properties like "Hellboy," and "Family Guy."

What inspired him early on? He read Jack Kirby and enjoyed Marvel Comics a lot. 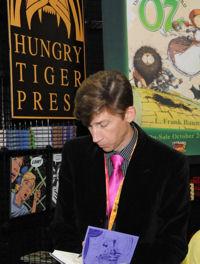 Eric Shanower is also a local artist based at the Redwood Village, which is at University and 158th. He is a winner of several Eisner awards, which would be like a Golden Globe award in the comic book industry.
One of his works is the continuing series "The Age of Bronze," This is a retelling of the Trojan War in comic form. Shanower has set all the artwork in the 13th B.C.E.  Homer's Iliad is one "of the oldest stories and does not go out of style." He also added that as "comic form it is readily accessible."
He also helped publish "No Straight Lines: 40 Years of Queer Comics." He has had no negative reactions to his work, he said. ECM specifically asked about the voluntary Comic Code, a product of the McCarthy era, which is now gone.
His creative talents have also been applied to adaptations for the visual form of the Oz stories, by L. Frank Baum. For this he is the writer, not the illustrator. For the "Age of Bronze" he is both the writer and illustrator. "Age of Bronze" is published by Image and can be found at major online retailers and local comic shops.  There’s even an IPad app for it.
The Oz adaptations were picked up by Marvel, one of the largest publishers in the industry.
For more information, "Age of Bronze" see http://age-of-bronze.com/  and http://ericshanower.com/ 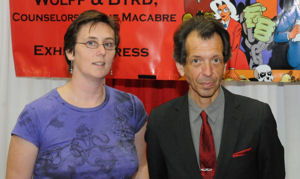 Melissa Uran and Batton Lash run Supernatural Law in the College area near SDSU. This comic series has a very interesting premise, "Who's scarier than Frakenstein? His attorneys." These attorneys, Wolf and Byrd, take cases from monsters and other supernatural creatures that are having their rights violated.
It is a way to humorously tackle social issues. For example, one of their cases involves two monsters who were born in a lab, but were forbidden to marry. The lawyers take on the case and in the end win for them.
Lash has never participated in the Comic-Con, and the only time he had any backlash was when he was actually doing political cartoons. As a comic artist he "can fly under the radar."
Another parody of his took on the IRS with a parody of "The Terminator." Money is so scarce in the future that the IRS sends agents to the past to collect taxes.
His work can also be found at online retailers or local comic retailers.
Like Martinez, both artists started drawing early on and it became a life time avocation.