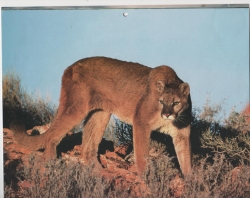 August 6, 2012 (Santee)--A mountain lion has been reported in the 10700 block of Princess Arlene, a residential neighborhood in Santee.  Incident Page Network indicates that San Diego Sheriff and animal control officers are conducting a search of the area.

A mountain lion was also spotted days ago in an Alpine residential neighborhood.  Mountain lions are native to our region, though the normally shy animals are rarely seen.  Shooting a mountain lion is illegal in California, except in cases where a permit is obtained such as to address livestock predation.  Violators have faced stiff penalties.

When a mountain lion is in the area, don't panic. It's wise however not to allow small children or small pets outdoors unsupervised.  Avoid creating an attraction for the lion, such as chickens that are not in a protected coop.

Mountain lions have vast territories and have been known to travel hundreds of miles in a matter of days.  One local lion killed by a vehicle in the Jamul area was found to have frequented a beach north of Oceanside.

I cringe when I hear of these sightings. Often what follows is news of the animal being tracked-down and shot.

but if it's in an area frequented by kids then the safety of the kids has to come first.

Sometimes officials will just scare lions away but there is always a risk they will shoot.  If you want to protect the lion, you're better off not to call authorities unless it really poses a threat, such as if one has wandered into your home.

Noise and motion sensor lights can be good deterrents if a lion is hanging around your property.  When walking, carry a walking stick and bring a companion - sensible common sense things that people do in other parts of the country where lions, bears or wolves are common, such as Alaska and Montana.