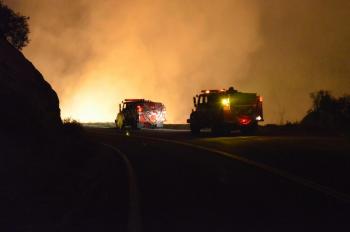 August 10, 2012 (Chihuahua Valley) 3:30 a.m. – Hundreds of firefighters from across California have been called in to defend 60 homes in Chihuahua Valley, a box canyon northeast of Warner Springs. View a map.

The area contains stands of old-growth oak trees estimated at 400 years old, according to residents.

Residents, shut out of the area, fear for livestock trapped inside without access to water--and some people may be trapped, a property owner at the scene told ECM.

An evacuation center is set up at Warner Springs High School at 30951 State Route 79. Large animals can now be evacuated to Love Acre Ranch at 35490 State Route 79. 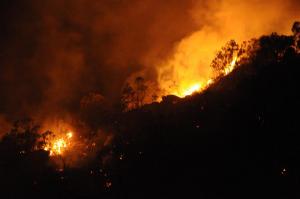 According to Battalion Chief Nick Schuler of Cal Fire, hundreds of firefighters are coming from all over California to help put this fire out. The good news is that there are no structures damaged or destroyed as of this time. The fire started at 1:14 p.m. on August 8. It was caused by lighting strikes which started two fires that have since merged.

We personally saw a fire crew from Los Angeles already on scene. We also saw United States Department of Forestry units as well as other local units.

The problem the valley has is that it is a boxed canyon with essentially one paved road in and out, and a secondary dirt road at the back of the canyon, called Indian Fire Road. It also has a poor supply of water and Chihuahua road is quite narrow. This means that moving fire apparatus can be challenging.

According to Charly Chrissie, an area resident who did not provide her last name, the valley has about 60-70 homes, and some residents have refused to evacuate, because they have livestock. She is a nurse and she learned of the fire at work, when her step daughter called her at 4 p.m.. She hustled 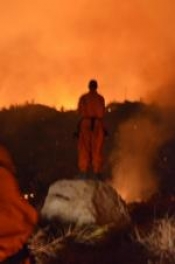 home, but with the traffic situation took her longer than usual.

“If I was allowed in when I got here, I have the trailers to move my animals out,” she said.  Sheriff’s deputies refused to let her enter the valley to retrieve them, even though the fire was not as bad as it is right now, according to the resident.

Charly showed us photos of her championship mule, under the oak trees where they have their enclosures. What is more, she pointed out that electricity had been off since three in the afternoon. Hence her animals were not going to get water either. According to her, Animal Control was not going to enter until the morning and with the smoke; she feared it might be too late for her animals.

Charlie also said that one of her neighbors remained behind, because they could not move their livestock. She added that 80 percent of the residents of the valley have livestock and that she believed 60 people were trapped inside the valley.

Charlie is also a survivor of both the 2003 Cedar and the 2002 Coyote Fires that burned near this area. As a survivor, she “has been through this before.”

She concluded, “This is the jewel of San Diego County, that is burning. There are oak trees down there that are over four hundred years old.”

Like many people in the back country, she takes pride in being very self sufficient.  She is aware of the fire hazard, but values the beautiful life—and believes she should have the freedom to choose whether to take a risk to try and save her treasured animals.

Unfortunately, this fire is a prime example of what Supervisor Dianne Jacob was adamently concerned about at yesterday's wind energy meeting regarding McCain Valley and other East County areas in her district.   She knows and has personally witnessed that our backcountry is extremely fire prone and lives are at risk whenever a fire breaks out.   Fires are hard enough to control as it is.   Why add to the risk by introducing structures that can either potentially ignite or hinder fire fighters and their equipment, especially those used for aerial assualts?   I can't imagine how much more difficult it would be to protect a valley such as this from fire if it were surrounded by almost 500-foot wind turbines, transmission towers and lines, substations, etc.

I truly hope and pray no lives are lost before this fire is extinguished.   It is one of the jewels of East County!