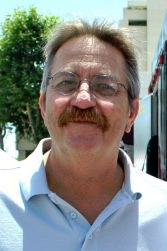 August 12, 2012 (La Mesa)—He once followed an Army reservist from Riverside to Bosnia, chronicling experiences in a combat zone.  He savored life and wrote about a wide range of subjects, from cooking to  cancer.  On August 4,  cancer claimed the life of Mark Anthony Petix, former reporter for the La Mesa Scout and ex-managing editor of the Riverside Press-Enterprise.

He graduated from Grossmont High School in 1973 and from San Diego State University in 1978. Later, he wrote for numerous newspapers  in San Diego and Riverside Counties.

While covering an education beat, he met his future wife, Tena, principal at an inner-city elementary school.  The couple recently celebrate their 17th wedding anniversary, according to his obituary.  A memorial mass was held on Friday at Our Lady of Grace Church.

“Mark was a gifted writer,” said Riverside Press Enterprise editor Nels Jensen, who added that Petix had many friends.

He is survived by his wife, Tena, his sister, Susie Petix Wilson, his mother, Wilma Petix, as well as uncles, aunts, and nephews.

His brother, Steve Petix, a reporter at the Daily Californian, was killed in 1988 while defending his wife in an attack at their home.  Following the assailant’s sentencing to life in prison, Mark said of the verdict, “"As long as this person is not allowed to hurt anyone else, I'm perfectly satisfied. We'll leave final judgment to God."

UT San Diego has set up an online memory book, where local friends have posted memories.  “He always put a smile on my face and could be counted on as a kind and genuine friend,” wrote John Parsons of La Mesa.

The online blog All is Yar has posted a tribute to Petix and has begun reposting some of Petix’ works, very few of which are currently online.  No copies of his La Mesa Scout stories were readily available, however you can read other works of his at http://allisyar.com/mark-petix/

This excerpt from his series chronicling the experiences of an Army Reserve soldier in Bosnia illustrates his powerful prosed, which will be missed by many:

He travels narrow mountain roads where the brooding faces of war dead stare out from granite memorials, through an alpine landscape littered with millions of undiscovered mines.

To step off the road here is to dance with eternity.