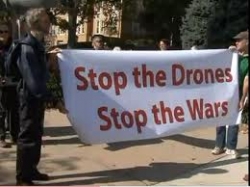 August 13, 2012 (San Diego) -- Veteran and associate members of the San Diego Veterans For Peace will be launching a protest on Thursday, August 16 from 4-6  p.m. and on each Thursday thereafter at General Atomics, corner of General Atomics Way and Scripps Poway Parkway in Poway.  The aim is to educate the public concerning the current and expanding use use of the Predator Dron aircraft throughout the skies of the United States including along our border with Mexico in San Diego and East County.


Homeland Security and law enforcement are using the drones to do surveillance work throughout the United States without judicial oversight, says Gil Field, director for communications with Veterans for Peace.  “Law abiding citizens, meeting to conduct business or political affairs, are being recorded and documented by the US government and local officials for unknown purposes.  The Predator Drone, made by General Atomics, in Poway, makes continuing war an easy choice, thus keeping America embroiled in current and future wars of choice.”

The San Diego Veterans For Peace is a 501-C-3 veterans educational organization that works to increase public awareness of the overall costs of war and to restrain our government from intervening, overtly or covertly, in the affairs of other nations.  The public is invited to join in the demonstrations.

Additional information concerning the weekly demonstrations may be obtained from Dave Paterson, 760-207-9139, or dpatterson998@yahoo.com.