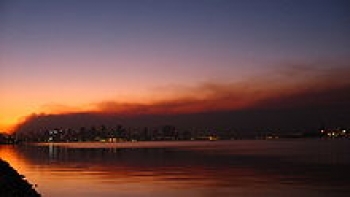 August 16, 2012 (San Diego’s East County) – Amid blistering heat and wildfires blazing across our region, here’s news that may inspire a chill down your spine.

A recent issue  of Al Qaeda’s publication, Inspire, has surfaced on jihad forums inspiring Western terrorists to start forest fires in the U.S.

While Homeland Security has warned of the potential for wildfires to be used as weapons of terror in the past, the latest Inspire issue specifically included directions for building an ember bomb, Wildfire Today reported in May. The Inspire article included step-by-step instructions for building an ember bomb. Moreover, the piece listed California as one of several potential targets, among other wildfire-prone regions.

The website Public Intelligence has published details of a recent Homeland Security warning on the heightened threat of wildfires as a terror weapon:  http://publicintelligence.net/homeland-security-warns-of-terrorist-wildfire-attacks/   The site includes documents apparently obtained through a public records request,  including a May 31, 2012 Homeland Security warning to officials providing awareness of “terrorist interest in the tactic of intentionally setting fires to cause csaulties, economic damage and resource depletion.”

The website Security Management on May 25 confirmed that the Denver FBI has warned of jihadist wildfire as a threat:  http://www.securitymanagement.com/news/denver-fbi-warns-jihadist-wildfire-threat-009901

The Rural Domestic Protection Consortium, which offers training for rural first responders through the U.S. Department of Homeland Security, currently has a webpage warning of “pyroterrorism” as an emerging form of terrorism: http://www.ruraltraining.org/resources/item/pyroterrorism-emerging-form-terrorism

Back in 2006, the National Criminal Justice Reference Service included an article that cites San Diego’s 2003 wildfires as a specific example of how a region could be vulnerable to pyroterrorism: https://www.ncjrs.gov/App/publications/Abstract.aspx?id=236584

The Examiner  on June 29, 2012 listed preventative measures,  and confirmed that  DHS has stated that it does  not have knowledge of a specific plot but does view pyrotetrrorism seriously as something that could happen: http://www.examiner.com/article/al-qaeda-inspires-terrorists-on-how-to-set-wildfire-u-s

The FBI regional telephone numbers can be found online at http://www.fbi.gov/contact/fo/fo.htm and the DHS National Operations Center (NOC) can be reached by telephone at 202-282-9685 or by e-mail at NOC.Fusion@dsa.dhs.

For information affecting the private sector and critical infrastructure, contact the National Infrastructure Coordinating Center (NICC), a sub-element of the NOC. The NICC can be reached by telephone at 202-282-9201 or by e-mail at NICC@dhs.gov