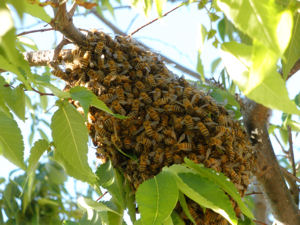 By Derek Roach
August 21, 2012 (San Diego’s East County)--The colonization of Africanized Honey Bees in San Diego County was confirmed in 1994 and has since caused multiple fatal attacks in Southern California. Feral honeybees in urban areas of San Diego County have been determined to be predominately Africanized by biologists who test the genetic makeup of local bees.
Africanized “Killer” Bees are indistinguishable in appearance from their cousins, European honeybees. Where these two types of bees differ is in behavioral characteristics. The slightest motions or vibrations can provoke Africanized bees causing them to attack.
AHBs are much more aggressive during attacks and will pursue victims in a larger group for further distances. While a European hive may only sting a person 10 times when disturbed, an Africanized hive may deliver up to 1000 stings.
However, contrary to their infamous alias - “killer” bee - this insect’s venom potency is comparable to other bees.
Beekeepers are taking precaution with their hives that demonstrate aggressive behavior by replacing the queen bee with a more docile queen. The process is called “requeening” and allows for the new offspring to be free from the Africanized gene and for the current aggressive worker bees to die off within a few weeks or months.
Other beekeepers take zero risk of raising an Africanized colony and killing off the entire aggressive colony.
Africanized bees are a hybrid mix of African & European bees that developed after a group of African Bees were accidentally released from an apiary in Brazil. Although killer bees are feared by most, it is the preferred type of bee for beekeepers in Central America and tropical areas in South America because of their enhanced productivity.
The bees traveled north rapidly after their escape from Brazil in 1957, reaching Texas by approximately 1990. At one point Africanized bees were moving north at a rate of 100-300 miles per year and found as far north in California as Tulare County and Santa Barbara, but since 2005 northward migration has stopped. Biologists in San Diego County continue to find Africanized beehives each year.
It is recommended to treat all bees as Africanized to prevent encountering an aggressive hive and have a bee control professional remove any unwanted hives from properties. Swarms or new hives that have invaded roof eaves or other enclosed area will not show signs of aggressive behavior for a few weeks. Once honeycomb has been established, the bees become more protective and easily agitated.
Here is an informational graphic that illustrates the migration and behavior of Africanized bees.
Derek Roach is a local bee control professional. He can be reached at derek@propacificbee.com or  760-480-4844 for  questions or more information on Africanized Bees.

Bees “swarm”” to find a new home when they outgrow their current hive. They are not aggressive during this process, usually spending the afternoon in a tree or similar point and departing the next morning.
This is normal and natural and is not to be confused with an attack of bees defending their nest.
Please try to understand the words you put in your headlines. The factual article is not related to the headline.
AFRICANIZED ‘KILLER’ BEES STILL SWARMING IN SAN DIEGO COUNTY

I changed the headline to active. While swarming was not inaccurate, I agree it's better not to have people panic just because they see a normal swarm of bees. We have had swarms in our own yard and attic. When outdoors it's best to leave them alone for a few days and usually they will go away.  If they don't, or if they are in your attic, then other steps can be taken.

Honey bee populations have faced declines in recent years from various causes; scientists are not sure whether it is disease, climate change, or pesticides.  Healthy honey bees are good for the environment, since they pollinate our gardens and other plants.  But if bees are aggressive or in an area where they could pose a danger, then it's time to seek help to remove them.

Swarms of Africanized Bees are found in San Diego every year and with this heat wave late in the summer, hives are continuing to swarm. I don't think the headline is misinforming.