Local tribal leaders suggest that the hearings are merely the appearance of appeasement while the agency continues its full-steam-ahead approach for projects touted as renewable energy. Such projects, however, are destroying sacred sites and cultural resources across the U.S. even in areas that had protected status.

“It is critical that we listen to tribal people about sensitive and significant cultural issues concerning sacred sites,” said Acting Assistant Secretary Donald Laverdure in a press release announcing five listening sessions. “Our nation-to-nation relationship is one that is based upon mutual respect, and that includes an ongoing dialogue about places central to Indian identity and cultural ways of life.”  http://indiancountrytodaymedianetwork.com/2012/08/06/sacred-sites-listening-sessions-scheduled-127559#ixzz24EK6p1VN

“The DOI representative, Dion Killsback, said they wanted to be “sensitive” to the Natives who might not speak about sacred sites on the record,” she recalle 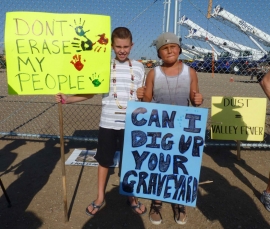 d. “He said they were taking notes. Preston asked who is taking notes. The person assigned to take notes was not in the room!  Preston then asked him, are we depending on your memory then? It was not a pretty scene.”

Other tribal representatives present were also offended at this lapse, mentioning that “the government must feel that what we say is not important enough to be recorded,” Arrowweed disclosed, adding that she hopes future sessions will be recorded.

The Quechan, based in Fort Yuma, Arizona, have filed a lawsuit seeking to halt the Ocotillo Express wind project on federal Bureau of Land Management property.  Multiple tribes in San Diego and Imperial Counties view the Ocotillo site as sacred, called  “Valley of the Dead” because it is where they have buried their people for thousands of years.

Mountain ranges at the site are considered the site where creation began in tribal religious beliefs. Tribes want the federal government to recognize sacred landscapes such as this. The site also contains over 10,000 known artifacts, and a spoke wheel geoglyph listed on the National Registry of Historic Places.  Tribes hired forensic dogs that identified some 50 sites believed to contain their ancestors’ remains. 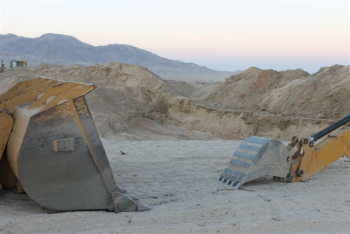 The developer, Pattern Energy, and the BLM have made minor changes in the project in response to tribal concerns, but have repeatedly denied tribal requests to halt the project and assure protection of all cultural resources. Neither responded to ECM's request for comments on this story.

Courtney Coyle, an attorney with Viejas, has suggested that tribes ask for sessions to be transcribed by an attending court repoerter.

“Written statements are most important as the “listening” session was not recorded,” said Helen Arrowweed, who noted that “all testimony went up into the ether.”

John Bathke, historic preservation officer for Quechan, is also outraged.  He observed that “if they were serious about getting the input from Tribal Governmetns, they would have either recorded it, or if they were concerned about sensitive issues, they would have asked the Indians what they thought or thought of an alternative around that issue, but still document it fully in the end.”

He added, “I am beginning to suspect that they [the listening sessions] are an appeasement, of sorts, to Tribal Governments like Quechan and Cocopah and others that are upset at what this administration’s renewable energy projects are doing to sacred sites. In essence, at these listening sessions, we are dealing with the people at the same level of bureaucracy (in the BLM) in this administration that has gotten us NOWHERE,” he wrote in an email.

Donna Tisdale, cofounder of the Protect Our Communities Foundation which has also sued to try and halt the Ocotillo project, had this to say. "I think John is right on target...it is all about appeasement and distracting attentionw hile the destruction continues virtually unabated."

ECM asked the BLM and the U.S. Department of the Interior, which oversees the BLM, to respond to the concerns raised. The agencies did not reply. 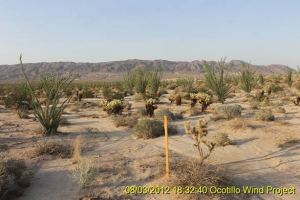 Dion Killsback, Northern Cheyenne counselor to the assistant secretary of Indian Affairs at the U.S. Department of the Interior, said secrecy of Native American religious and cultural practices is a challenge.  According to the AP, Killsback has indicated that tribal leaders should be involved early on so that tribal beliefs can be respected and projects can move forward.

But Bathke and other tribal representatives want to see projects halted—not moved forward.

“Unless these meetings create needed media coverage, I have little faith in the efficacy of them,” he said of the hearings.  “They are `listening’ to us, but they are not `hearing us.’