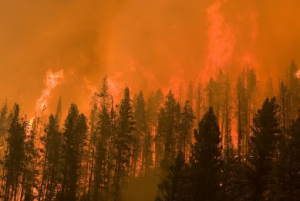 August 25, 2012 (San Diego’s East County)—High temperatures and the worst drought since the Dust Bowl in the 1930s have combined to fuel severe wildfires across the U.S.  in the first 8 months of the year, wildfires have scorched nearly 7 million acres—on pace to make 2012 one of the worst years on record.

That’s more acreage than burned in the first eight months of any year since the federal government began keeping accurate records in the 1960s.

Temperatures soared six to 10 degrees above normal over much of the nation, while precipitation fell in many areas.

"Few areas of the country escaped some level of drought,” the federal government’s Wildland Fire Outlook report for August through November 2012 states, adding that at least 34 states have experienced “severe to exceptional drought.”

According to the National Interagency Fire Center in Boise, 2012 is “shaping up to finish out as overall among the most severe seasons historically, but is consistent with the trends since 2000.”  So far this year, wildfires have destroyed 1,859 homes and caused 12 fatalities.

For September through Nove 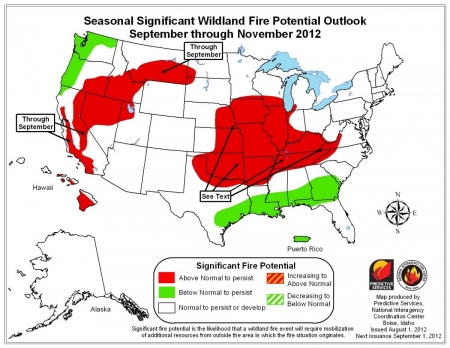 mber, climate projections forecast a continuation of above normal temperatures for much of the nation.

Risk of more severe fires across the country is worrisome for our region, since it means mutual aid resources for firefighting could be stretched thin as firefighters respond to multiple severe blazes around the U.S.

In Southern California, “above normal significant fire potential will continue” in higher elevations through September, with dry conditions and reduced thunderstorm activity forecast for our region.  By October, potential for severe fires will shift south and west “stretching to the coastal areas.”

The one bright spot is that precipitation is predicted to increase to “near normal amounts” across Southern California this fall.