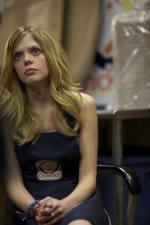 August 31, 2012 (San Diego) – Compliance made me feel uncomfortable and unclean, but that’s exactly how it wanted me to feel. My chest kept pounding and it wouldn’t relent. A part of me wanted to look away, but I couldn’t avert my eyes. It was a grueling experience emotionally, and when the film wrapped up, it took a few days for me to shake it off. Chills coarse through my body as I write this, and my stomach feels weird.

Those are just several reasons why Compliance is one of the best films of the year.

It’s a busy Friday at the local ChickWich when manager Sandra (Ann Dowd) gets a phone call in the back. On the other line is Officer Daniels, who claims he has a customer at the station accusing Sandra's young employee, Becky (Dreama Walker), of stealing money from her purse. Daniels orders Sandra to strip-search Becky to see if she's hidden any money. His requests soon get bizarre, unwholesome, and degrading. It turns out that Officer Daniels isn't really a police officer at all: it's an unassuming family man playing a trick for his own perverse pleasure. By the end of the movie, Becky is sexually assaulted by Sandra's fiancé (Bill Camp) and humiliated, all under “Officer Daniels'" orders.

Does this sound familiar? It should. This exercise in sadism really did happen at a Kentucky McDonalds in 2004. I first heard of this story, adapted by Craig Zobel (who changes the names), a few years ago, when the manager was interviewed on television. I could not believe that anybody in a supervisory position would believe what they were being told, much less follow his directions. How does something like this happen? Was she incompetent?

Then I saw Compliance, and for the first time I understood.

Pat Healy, as the caller, gives two chilling performances at once: one as the family man and the other as “Officer Daniels.” To Sandra and the other employees, his voice isn’t threatening or imposing. He sounds like an actual policeman. He always knows what to say next, he's always on his feet, and he improvises with the best of them. His requests are questionable, but he phrases them convincingly and compellingly. Watching at the theater or at home, one could easily say, “I wouldn’t believe it.” But then you weren’t there, listening on the other end. If I were Sandra, I'd be sure he was telling the truth, and that this is standard procedure. She doesn’t want to have Becky strip-searched. Nobody wants to do what Officer Daniels demands of him or her. But “Officer Daniels” sounds so authoritative, that they feel they have no choice.

Dreama Walker emerges as a new genuine talent. Sometimes the best acting hides in plain sight. You know that feeling in your face when you’re overwhelmed and on the verge of tears? When your mouth widens sideways, but not smiling; your eyes narrowing, but not with squinting force; and tears ready to surface, but you’re too ashamed to let others see you cry? That facial expression and emotion subtly communicates her fear without dominating her performance.

The wide-angle lens enlarges the cramped spaces in the back of the restaurant, but there's never enough room. Behind the counters, it's so cramped it's hard not to bump into other people. The “cold” desaturated colors produces in the room a perceived temperature as frigid as the snowy, chilly weather outside. The limited space means many close-ups, but the actors and director Zobel use them wisely. These close-ups generate an aggressive “in-your-face” passion. Their thorough and distinct capturing of the actors’ emotions makes Compliance all the more uncomfortably personal.

Compliance is now playing for one week at the Landmark Ken Cinema.