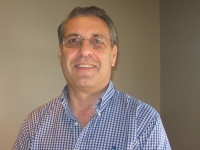 October 4, 2012 (Spring Valley) - San Miguel fire board recently voted to outsource all fire services to Cal Fire. There are six candidates running for four seats on the board. Other candidates include retiree Randy Dibb, incumbent board members Karrie Johnston Scully, fire captain/paramedic David Rickards, civil engineer John Revels, and college educator/businessman Dan McMillan. View a map of the district: http://www.smgfire.org/district-map. Below is a profile on retired civil engineer William Kiel.

A neighbor/good friend of his was a firefighter, and Kiel says he would see what was going on in the District. “It aggravated me to see this kind of mismanagement. I’ve sat on three non-profit boards. On the board, you negotiate all external contracts and rebid all of them. You could save five to ten percent of these; you get rid of the positions that aren’t necessary, and you cut expenses that aren’t needed and that you can’t afford. You need to get into a savings mode, not a spending mode. I enjoy doing the budget part [on the board]. As a civil engineer, I worked for Caltrans, and I designed and built bridges.”

Born in San Francisco in 1955, Kiel spent most of his life as a civil engineer. Now retired, he is also a successful real estate investor. He received his B.S. in engineering from San Francisco State in 1980 and his Masters in civil engineering from San Jose State University. He has lived in East County since 1986, has been married to his wife Karen since 1995, and has one son, William, who attends Christian High.

If he gets elected, he believes “the first and most important thing is to bring the San Miguel fire district back to the community. They outsourced it over to the state. And also, you need to get fiscal spending in order to save instead of spend. Spending is a common philosophy for the board.”

He has a negative view of the recent outsourcing of services to Calfire. “Residents don’t want it. I believe we could’ve gone with the 72 hour work week and still stayed in the district. Chief Ghio wanted to push this [outsourcing].”

With the current board, he disagrees with “fiscal spending. Board members are knowledgeable in firefighting, but not in spending. I don’t think they did proper oversight. They hired a chief that completely demoralized the department, they kept him on for over five years, and he was paid more than the governor of California. The chief supervises eighty-six employees. The governor supervises 250,000 employees. The people in the district are really unhappy with the outsourcing.”

However, he wouldn’t change what the fire-fighters have been doing to protect East County from major fires. “The response times are good. They’re properly staffed for that. Because of the 72 hour work week, there’ll be a lot more tired firefighters in the future.”

His budget priorities include “some positions that are not core fire-fighting positions that could be eliminated. For example, there’s a public-informations director. He’s been compensated with salary benefits $140,000/year. He has worked with the district for a little over five years, and he has medical benefits for life. Over the five years he’s been paid over $700,000 in salary and benefits. I don’t think this position is needed.”