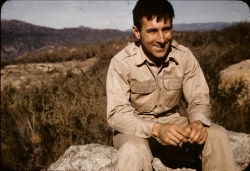 October 8, 2012 (La Mesa)--Russell “Gordon” Gastil, Ph.D. has made his final journey.  The San Diego State University professor emeritus known for trekking across and mapping the entire state of Baja, Mexico as well as much of the U.S. southwest died September 29, 2012 at his La Mesa home.

“He was gifted as a geologic visionary,”  geologic science professor wrote in a memorial published at the SDSU website.  “Gastil was an internationally renowned geologist for regional geologic mapping and work on the tedtonic evolution of convergent margins." He mapped thousands of square kilometers in Arizona, Calfiornia and the entire state of Baja, California in Mexico.

Gastil hired six undergraduate students in 1963 to produce a reconnaissance geologic map of Baja. Remarkably, the feat was accomplished in an era when there were no reliable topographic maps and virtually no paved roads, making access challenging. 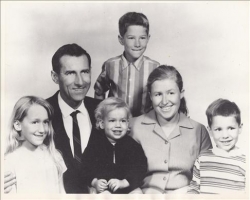 “Dad was one of the most fearless people I have ever known,” his son, Lemon Grove Councilman George Gastil, told ECM, adding that his strongest memories include  trips to Mexico when his father took the whole family on geology excursions.  “He traveled all over Baja before there was even a highway going down the peninsula. We often spent Christmas in Baja or Sonora out in the desert. I remember we had stockings hanging inside our big orange tent. Dad taught us to be resourceful and tough; he also had quite a sense of humor. He loved meeting people wherever he went.”

Gordon Gastil received the prestigious Dibblee Medal in 2002 in recognition of his extraordinary accomplishments in field geology and geologic mapping. He and his students frequently had works published in Geological Society of America Journals.  He also published a landmark 1960 paper in the American Journal of Science titled “The Distribution of Mineral Dates in Time and Space.”

Born June 25, 1928, Gastil grew up in Encanto and later moved with his family to Alpine, attending Grossmont High School.  Son of a teacher, he developed a passion for geology early in life, studying the subject at San Diego State Teachers College (SDSU today) and later obtained a bachelor of science and a doctoral degree in geology from the University, California in Berkeley.   His doctoral thesis involved study or radioactivity in Proterozoic rocks in Arizona, helping establish interest in the developing techniques of radiometric rock dating. 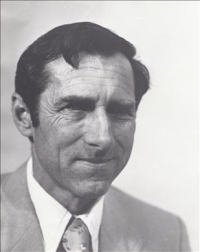 He worked briefly for Shell Oil company before being drafted into the Army, making maps in Alaska. He later did mineral exploration work and for three summers and spent winters at Harvard and in Montreal. He married Janet Manly in 1958 and they had five children (Garth, Mary, George, John and Brian, who died in infancy).  He taught t the University of California, Los Angeles before joining the San Diego State College (now SDSU) faculty in 1959.

Gastil was also active in politics for many years.  He ran for Congress in 1976.  “My Dad ran the whole campaign for $17,000 and he had TV ads,” George Gastil noted. “It’s hard to even imagine that today.  He collected donations from geologists all over the country and he also had quite a lot of friends at SDSU.”

He didn’t win his primary race, but later encouraged his wife, Janet, to run for La Mesa Spring Valley school board, Assembly and Congress.  “He was a big factor in all of my mother’s campaigns,” George Gastil recalled, adding that his mother won her first school board race by just 13 votes and served three terms.  She later ran for Assembly against Steve Baldwin in 1996 and for Congress twice in 1992 and 1994 against Duncan Hunter Sr.

An active member of the La Mesa Foothills Democratic Club, in his early days of political activist Gastil supported George McGovern’s presidential campaign and served as precinct coordinator for Colleen O’Connor when she ran for Congress.

“He encouraged me and helped me in my school board race,” said George Gastil, who was elected to Lemon Grove School Board before running successfully for the city council.  “Something my Dad really believed in strongly was that people should be able to get their messages out.” Gorgdon Gastil served as issues director for Common Cause for many years and was also involved as Citizens Coordinator for Century 3 (C-3), a group formed to plan San Diego's future around the city's bicentennial celebration.

“His biggest concern was care for the earth and responsible planning,” George Gastil recalled. “He put an awful lot of energy into trying to get an intelligent discussion about growh in San Diego and how we were going to plan San Diego responsibly.” 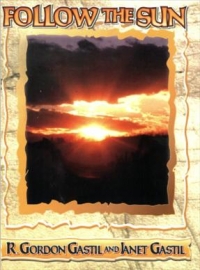 A prolific poet and author,  Gastil wrote a book titled We Can Save San Diego in 1975.  Gordon and Janet Gastil also coauthored Follow the Sun, a historical novel based on their travels.  The work of anthropological fiction traced the path of an imaginary ancient traveler who circumnavigated the globe.  Much of the book was written in Julian, where he and Janet maintained an orchard.

He remained active late in life, even after suffering a stroke.  Maureen N. Moses, who studied geology at SDSU after Gastil retired, him coming to SDSU’s Geological Sciences department for visits in his later years, asking questions about current research. “The love he fostered was returned by his former students, my professors, who helped him walk…and listened as Gordon reminisced about past adventures that are an inevitable part of an education in geology.”

Gastil spent his last days listening to his family sharing stories, reading his poems aloud, singing songos and reminiscing on their shared lives.  He died at his home in the company of his loving family and friends.

He is survived by four children, Garth, Mary, George, and John, along with three grandchlidren, Charles, David and William Gastil.

A memorial service will be held on Saturday, October 27 at 2 p.m. at the San Diego Friends Center meeting room, 3850 Westgate Place, San Diego, CA 92105.  The public is invited.

A website commemorating Gastil’s life and legacy has been set up at http://memorialwebsites.legacy.com/gordongastil/homepage.aspx