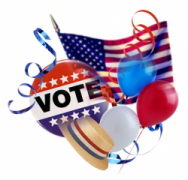 October 26, 2012 (San Diego’s East County) – As nonpartisan, nonprofit media, East County Magazine does not endorse candidates. W strive to provide information on all sides of ballot initiatives and issues, along with candidate interviews, videos of debates and forums, and more.

Bafffled by the ballot initiatives? Our guide to the pros and cons of Props 30 through 40

Candidates’ values clash: Former Chief runs against Board member who fired him

A learning experience: candidates clash at forum hosted by ECM

Barbara Stevens: strives to do “right thing for parents and students”

Jim Stieringer: believes he can create harmony among board members

SUPERVISOR (Steve Danon did not respond to an interview request)

(Note, Linden's opponent, Mario Tilario, did not respond to our questionnaire but did answer questions from U-T San Diego.)

A look at Duncan Hunter's record

Secor editorial: Hunter believes corporations are people, women are not

Congressman Bilbray accused of being slumlord

(Note: Nick Popaditch has not responded to interview requests.)

View links to past stories on Davis’ bills and stances on issues: http://www.eastcountymagazine.org/search/node/susan%20davis

Block, Plescia via in heated race

The Businesswoman and the Teacher (Mary England vs. Dr. Shirley Weber)