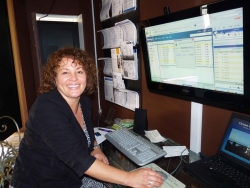 October 29, 2012 (La Mesa)—The owners of Hunter’s Carpet in La Mesa have sent a letter to Council candidate Laura Lothian, with a copy to the City Attorney, contending that Lothian’s campaign falsely represented the carpet company’s property as an eyesore.

“The picture you promote as “typical trash” in the city is a gross misrepresentation,” the owners wrote.  “Evidently it’s your practice to be deceitful during your political campaigns,” the letter added, noting that the tactic is “similar to your last election campaign.” Lothian displayed a photo of the property in campaign materials touting a need to eliminate blight.

But owners Lyn, Alan and Danie Hunter say that as a service to their customers, they take in old carpet and place it in the store’s dumpster.  “The trash is serviced daily Monday through Saturday and on occasion there is an overflow which is removed the same day or the following day,” their letter indicates. 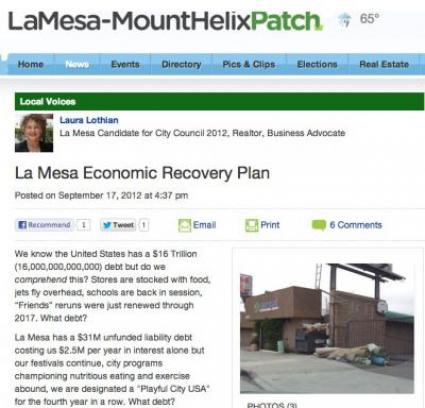 In the letter, dated September 28, they asked Lothian to remove the photo from her campaign materials.  ECM has asked Lothian for a response but has not received a reply.

Lynn Hunter said she learned of the problem when a customer brought in a postcard displaying the photo.  The image was also used in a  Patch.com blog post by Lothian and on her website.  In a phone call today with ECM, Hunter said she received a response from Lothian that the photo had been removed off the website, but she is not aware if Lothian is continuing to distribute the post cards or not.

In the 2010 election, when Lothian ran for mayor, she told ECM that she was inspired to run in order to clean up the city, citing trash and graffiti as key problems she hoped to correct.

A local merchant, Michelle Tackett, accused Lothian of piling up trash for a photo shoot at a lot across from her business in the 2010 campaign.   Lothian denied the allegation.

“I never piled up trash.  I did not import trash nor did I move trash from one spot to another…There was no stunt there,” Lothian told ECM in an e-mail after the incident, adding that Google Satellite photos confirmed trash “visible from space” 24 hours before the photo shoot.  Satellite photos provided to La Mesa Patch, however, were undated.

Trash issues aren’t the only ethics questions Lothian has faced.

The Fair Political Practices Commission ruled a mailer feature Lothian and others was illegal;  Peter Cuthbert, who organized the flyer, was fined $2,500.  Lothian denied knowledge of the mailer, however Cuthbert told media that Lothian had approved the mailer in principal and provided her biography, though did not review the final content.   Council candidate Ian Schiff, also featured on the mailer, confirmed that Cuthbert did inform him of the mailer and obtained his biography, though did not send final content for review.

During the 2010 election, questions also swirled around an incident in which Lothian’s daughter, then 19, was arrested for violating La Mesa’s social host ordinance for a drinking party involving numerous minors at the candidate’s home.  Lothian denied knowledge but further,  accused another candidate of libel  and insisted that her daughter was never arrested.

ECM obtained police records through a public records search at the time, which revealed that Lothian’s daughter was indeed arrestedfor a violation of 10.38.030(a) L.M.M.C.-Social Host Ordinance. She later pled guilty to an infraction under a plea agreement reached.

An ECM investigation in 2010 also found that Lothian and/or  her former husband, Matthew Lothian, faced numerous tax liens, collections, foreclosure and eviction following Matthew Lothian’s conviction for fraud in a telemarketing scam.  Lothian had children with him and stayed with him for 12 years after his conviction, but denied any involvement or knowledge of the crimes. The couple later divorced in 2002 following his bouts of depression and alcoholism.

She has rebuilt her life as a successful realtor in La Mesa, a community she likens to “Mayberry” for its friendly small-town environment. Lothian serves on the parking commission and has been an advocate of beautifying and cleaning up the historic downtown village.

A fiscal conservative, Lothian says she is “empathetic to the struggles of businesses.”  In her 2012 campaign, her website lists as her  priorities “to better our community, decrease crime, increase property values and attract and retain high quality residents and businesses.”

Editor’s note:  A reader, Highlander, sent the following remarks regarding Lothian’s comments which he was unable to post due to an issue with our spam filter that we’re working to resolve.  He asked us to post it.

It appears that Ms. Lothian has some other supporters that have put out another flyers touting her as one; “Who Can Bring More Jobs To La Mesa” Now Ms. Lothian or someone learned a lessons from the CUTHBERT vs. Fair Political Practices Commission issue 2 years ago that she was involved in and had the right statements affixed to this latest flyers [“Not authorized by any candidate or a committee controlled by the candidate”] and that it was [“Paid for by the California Real Estate Independent Expenditure Committee.”]

They indicate that she is a “---- Champion of Small Business” and that “---understands what it takes to bring more jobs to our city” they talk about “---how our City has short-sighted regulations and high fees discourage businesses from relocating here.”

But she has not stated what Regulations & Fees they say discourage business. They also state That she will work to enact policiesthat will make it easier for a business to get started & remain in La Mesa long term, Again What Policies? A statement that says “To help ensure economic prosperity for years to com,”--- “ make it a priority to maintain our vital infrastructure & invest in our public schools while keeping our taxes low” Now come on! Ever one understands that the City Council has nothing to do with SCHOOLS?

Even as short sided as a lot of her ideas are, not even she or the California Real Estate Independent Expenditure Committee can expect you to buy into the Idea That Schools are a City Issue, Is that another DECEITFUL Ploy?

Maybe one should ask yourself this? If she is possibly DECEITFUL when it comes to Trash, is it possible that filling vacant properties and increasing Property values will only lead into increasing coffers of the real estate personnel who sell & trade in these things and really have nothing to do with making our City (All 9 Sq. Miles of it) a better place for all of us, Like a City Council person is supposed to do!