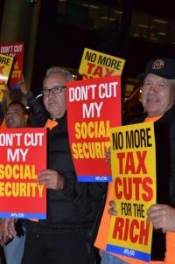 December 10, 2012 (San Diego)-- The mood was defiant as workers from throughout San Diego County converged at 750 B Street in downtown San Diego for a rally to protect Social Security and the rest of the social safety. This event was one of a hundred rallies held today around the nation urging Congress not to slash benefits as the "fiscal cliff" deadline approaches. Several rallies were held locally, including protests at San Diego’s Congressional members offices as well as downtown.

According to Lorena Gonzalez, Secretary-Treasurer of the San Diego and Imperial Central Labor Council, “We want to send a clear message to representative, that people came out in November.” Politicians must respect the will of the people and not slash benefits to retirees on Social Security, Medicare and Medicaid, she added. “We do not need more tax cuts, but to protect Social Security and Medicare.”

The lame-duck Congress is expected to vote before year’s end on whether to raise taxes on the wealthy, as President Barack Obama has proposed to help resolve the deficit.  If no action is taken by year’s end to enact a budget and address the deficit, sequestration cuts would automatically kick in across all federal programs from Defense to Social Security and Medicare. As Republicans in Congress grapple for alternatives to raising taxes on the top 2% of earners, even cuts to such sacred cows as the mortgage tax deduction and charitable deductions have been raised as options.

ECM asked if Congressman Brian Bilbray (R-51) who has been termed out by Congressman-Elect Scott Peters, (D), might be more willing to vote against his party now that he has nothing to lose. Gonzales emphasized that while that is possible, the rallies are more to push “our own people and keep their feet to the fire.” Rallies locally included actions at the offices of Congresswoman Susan Davis (D) and incoming Congressman Juan Vargas (D).

Evan McLoughin from the Central Labor Council put it far more starkly. “What is at stake is the social safety net that has been in place for generations.” He added that a good cross section of society turned out to support these programs. About 50 people, from laborers to teachers, participated in today’s rally downtown.

Among them was Greg Robinson, an instructor at Grossmont College in El Cajon and newly elected member to the County Board of Education. When he addressed the crowd he said that the programs could be saved easily. One of his remedies was to raise the cap on Social Security payments. This is not as revolutionary as it might seem, and has even been suggested by the President himself.

"You know, I do think that looking at changing the cap is an important aspect of putting Social Security on a more stable footing,” the President recently stated.  http://www.huffingtonpost.com/2012/09/21/obama-social-security_n_1903773.html 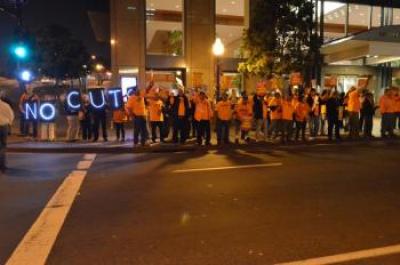 Robinson added that it is time that the very rich pay the same taxes as firemen, police officer, and other workers.

Robinson, who is a member of the American Federation of Teachers also said that the problem is not that we lack money. The problem is the distribution of the wealth. He also said that it is “common sense, one thing that liberals and conservatives agree on is education.” He added that Education, retirement and healthcare, it does not get any more basic than that.”

Vivian Rudolph. a member of the American Federation of Government Employees, (AFGE) said that she came to support Social Security and protect the jobs of those federal employees. AFGE represents 642,000 workers, many here in San Diego such as Border Patrol, Homeland Security, Balboa Hospital and civilian Department of Defense employees.

The rally included many chants, from the traditional “Si se puede,” to “When they say cut back, we say fight back,” “Stand up, fight back,” and “he, he, ho, ho, the tax cuts have to go!”

Drivers for the most part seemed supportive. Just one passerby voiced an opposing point of view, telling protesters,“Go do this somewhere else!”  Several workers replied that they were here to save her Social Security.