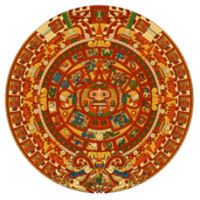 December 15, 2012 (San Diego's East County)--With all of the news surrounding the Mayan Apocalypse supposedly taking place on December 21, 2012, one aspect of the coverage has been glaringly incorrect. The graphic above has been used as an example of the Mayan Calendar. It is not. It is the Aztec Calendar. In fact, the Mayan Calendar is much more complicated.

The Mayans used a combination of three calendars: Haab, Tzolkin, and the Calendar Round. The Mayan calendar of 365 days is called Haab.  It is divided into 18 months of 20 days, each with a period of 5 days left over at the end of the year. This short 5 day month Uayeb was often seen as a dark time. 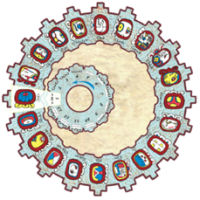 There is also another calendar cycle for the Maya called Tzolkin. It is a calendar of 260 days.  It is composed of 13 months, each with 20 days. Every day in the 260 day calendar has a unique position in time like the Haab or the solar 360 + 5 day Maya calendar.  Each day’s position in the calendars only repeats itself every 52 solar years. 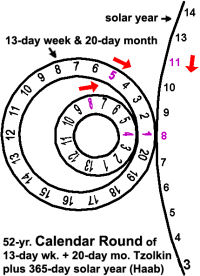 A cycle of 52 solar years, called the Calendar Round combines with both the Haab and Tzolkin calendars to form a calendar system of vision and time.

In addition, the Mayans developed the Long Count which counts the number of days since their first day -- the day the calendar began, or the time it takes for the Solar System to return to the same position in the Milky Way. It is the combination of all three calendars and the Long Count that lead to the prediction of the end of the world as we know it on December 21, 2012.

For further information, please visit the sites below used in the preparation of this article, or many more available on the web: