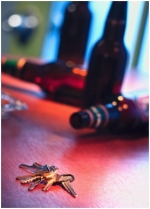 December 23, 2012 (Rancho San Diego) – From 8 p.m. last night until 2 a.m. this morning, deputies and officers from the San Diego County Avoid 15 Task Force conducted a DUI sobriety and driver license checkpoint near the 2800 block of Jamacha Road in the uninincorporated area of El Cajon. A total of 34 vehicles were sent into secondary screening and 10 field sobriety tests were conducted on drivers. Two DUI arrests were made along with three felony arrest for possession of a controlled substance, and eight citations. In addition, four vehicles were  impounded at the checkpoint--one because the driver's license was suspended or revoked and three because the drivers were arrested.

The purpose of the checkpoint was to remove impaired and/or unlicensed drivers from the roadway, public education and deterrence thereby increasing the safety of all drivers and allowing for a safer driving environment, a press release from the Sheriff indicates. The operation was funded by a grant from the California Office of Traffic Safety through the National Highway Traffic Safety Administration.