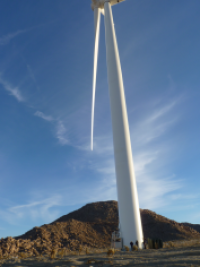 January 21, 2013 (San Diego) – On Friday, January 18, U.S. District Court Judge Gonzalo Curiel heard arguments in a lawsuit filed by the Quechan tribe of the Fort Yuma Indian Reservation against the U.S. Department of the Interior and Bureau of Land Management, as well as Pattern Energy and other defendants.

The suit contends that the federal government failed to protect Native American cultural resources, including sacred sites, when it allowed the Ocotillo Wind Energy Facility to be built. Moreover, Quechan contends that the federal government's reclassification of protected lands to accommodate the wind project was arbitrary--and that a similar decision to industrialize almost any public lands regardless of damage to resources could be done if the government's action is allowed to stand.

The tribe claimed a violation of the Native Heritage Preservation Act and contended that the BLM did not consult with the tribe prior to project approval.  Judge Curiel noted that the BLM had contacted the tribe, but Quechan attorney Thane Somerville argued that the burden rested on the BLM to propose meeting times.

The judge next asked about the cumulative impacts of this project along with many other large-scale energy projects proposed on BLM lands and suggested that the analysis “appears compartmentalized.”

BLM attorney Marissa Piropato said the BLM analyzed an area 10 miles beyond the project boundaries.   Another attorney arguing for Pattern Energy, the project developer, insisted that an “extraordinary job” was done of analyzing cumulative impacts.

But the Quechan attorney offered compelling evidence to the contrary.  He noted that multiple 9th Circuit cases require detailed analysis of cumulative impacts and cited as precedent a case in which the court held that 2 milion acres of national forest acres needed to be analyzed. “The 9th circuit rejected the government’s argument outright,” he observed.

Quechan’s attorney pointed out that the California Desert Conservation Act protects 6 million acres of class L lands which should be analyzed together, since many other massive projects are proposed on class L lands. “The intent was to place protected cultural resources onto class L lands,” he observed. “The decision makers and the public need to know the cumulative impacts and how those cultural resources on Class L land will be impacted.”

The BLM lawyer maintained that the law doesn’t require that , adding that “This idea that class L land provides special protection for cultural resources” is incorrect.

Judge Curiel voiced interest in visual resources that Quechan argues are part of a “spiritual landscape” that has been harmed by the project.  He asked what the interim reclassification to class 3 was based upon.

Piropato said the BLM “manages visual resources like any other” conceding that when wind resources were found, the BLM “changed the designation to fit the use” from class 3 to class 4.

“So there was not the kind of probing analysis to change it to class 3 as there was to class 4?” the judge asked; Piropato said that was correct.

Quechan’s attorney argued that the BLM’s argument “allows them to wait for a project, then choose the least restrictive class.”  He called that approach “arbitrary and capricious” and noted that NEPA requires management to protect visual resources.  He added that Class L designation allows only those multiple uses that allow management for protection of visual as well as cultural resources.

“They changed the standards to allow a project which otherwise did not comply,” Somerville argued for Quechan. He noted that by BLM’s definition, “wind can only be consistent with class 4.” He later added, “The change to class 4 is based on nothing except the desire to place this wind project there.” He reiterated that Class L requires management to protect culturally sensitive resources and scenic values.

“Imagine if the city of San Diego managed land this way--just waited until someone wants a 100 story building and then say it’s okay to approve it.," Quechan's lawyer said.

BLM’s lawyer insisted that a “robust analysis” of visual resources was done .  A lawyer for Ocotillo Wind Express stated that “the land use decision drives the resource plan,” not the other way around.

The judge asked Quechan if the tribe’s view was that any wind turbines in the area would reduce visual resources.   The attorney pointed out that the tribe’s concern was with the specific project at hand.  Somerville further argued that if the BLM’s actions are allowed to stand, “it means that any wind project would be allowed on class L lands.”

The project is nearing completion, though of 13 turbines originally proposed, only 112 were approved.  Some were not approved due to cultural resources, proximity to bighorn sheep,  military, or other concerns.

“They are trying to put a round peg in a square hole,” Somervile contended.  “Even with all the mitigation, their own analysis admits significant diminishment of scenic value”  and cultural resources he added.  “The government did not analyze if the project is consistent with class L management. Their position is they don’t have to do that. …We have a very different world view” of what the law requires, he said.

BLM’s lawyer contended that class L lands could have “power plants or an airport” and insisted such uses could be compatible with protection of resources.  “Wind energy projects are allowed on class L lands provided that NEPA (National Environmental Poilcy Act) requirements are met.

Quechan’s lawyer fired back, “Their interpretation would mean there is no difference” in management requirements for several classes of land.  Everything short of wilderness designation could be open to wind development, he suggested.

The Judge asked the BLM for additional citations; the BLM lawyer said she had a “SNAFU” and would provide a thumb drive with more citations this week.

Judge Curiel indicated he expects to issue a decision within two weeks.

In this hearing, plaintiffs were not allowed to present evidence of specific damage to cultural and visual resources. No photographs were allowed to be presented, nor information on efforts by the BLM and Pattern Energy to thwart documentation of  cultural resources. For example, the BLM refused to recognizing findings by forensic dog teams hired by Native Americans; there was also an inexplicable delay of many months by environmental monitors to report key findings later confirmed by the Imperial Valley Coroner as ancient human remains.  Numerous artifacts have long been identified and recognized by the state on the site, which is known to multiple tribes as the Valley of the Dead.

But the project was built anyhow and is now nearly complete.  An ancient Spokeswheel geoglyph, recognized on the National Register of History Places, has lost all but a sliver of a view toward nearby mountains considered sacred at a site used to this day by multiple tribes for sacred rituals.

Earlier this month, the California Native American Heritage Association issued a scathing report blasting the BLM’s actions, going so far as to suggest that if adequate mitigation is not taken to address concerns of the Quechan and Viejas tribes, California’s Attorney General should file a lawsuit against the federal government.

Racism and retaliation is pervasive in the federal sector.   Internal discrimination within the federal workforce practiced by public officials in policy making decisions, often spill into the fair administration of public programs and services.  Native Americans settled a class action against the agency due to discriminatory practices.  See http://www.cobellsettlement.com/  Also see video exposing some problems within the federal workforce which is of utmost concern to U.S.. Citizens.   http://www.youtube.com/watch?v=MqyDPh3OHpk&feature=player_embedded&nored...

If President Obama fails in his second term to hold officials accountable for violating the civil rights of public servants or the public they serve, we can expect a progression of a toxic federal culture that will increase taxpayer costs, that will impair the health of civil servants, and that will jeopardize the unbiased, safe and efficient distribution of government services to the public.  High ranking officials within the Department of Interior, such as Craig Littlejohn, have been found guilty of discrimination.  Rather than impose mandatory discipline, the Coalition For Change, Inc. (C4C) learned after doing a Freedom of Information Act inquiry that Littlejohn received an "increase in salary." http://www.washingtonpost.com/wp-dyn/content/article/2010/08/25/AR201008...

In a recent Supreme Court decision and Opinion by Justice Kagan, the Supreme Court gave a scathing rebuke to the Government by indicating that they misinterpreted the Civil Serve Reform Act of 1978 (CSRA), and reherred to the "alternate universe" state of mind of the Government.

It is important for people to remember the many wind industry's lies. This article is full of them.
Birders are fanning wind farm opposition

Wildlife officials, bird watchers and land owners worry that the raptors may end up either pureed - or will move elsewhere to avoid the turbines.

From Wyoming to West Virginia, wind turbines have caused bird fatalities. Studies show that there are one to seven fatal collisions per turbine, per year.

At Altamont Pass, Calif., turbines have been blamed for thousands of bird deaths annually, but industry officials say that site is an anomaly. They say new technology and good siting has diminished fatal bird collisions.

For example, new turbines' rotors spin more slowly and are placed on higher towers, out of the birds' flight zones.

"The bottom line: We have found ways for birds (by being dead) to co-exist with wind turbines," said Christine Real de Azua, spokeswoman for the American Wind Energy Association.

"Bird and environmental issues were always at the forefront of our minds as we thought about our siting," Hantzmon said.