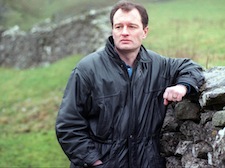 But from this point forward, I will forever remember him for the Up Documentaries.  In 1964, fourteen 7-year-old children were chosen for this project.  Today, they're 56.  For forty-nine years, British director Apted, now 71, has revisited these children and interviewed them about their lives and various topics.  That's half a lifetime.  Talk about dedication!

Thirteen of the fourteen original "children" participate in the newest entry, 56 Up.  Andrew is a solicitor.  John is a barrister.  Suzy is still married to her husband Rupert and their kids are now grown up.  Jackie, divorced from her first husband, and a single mother by the age of 35, is now a grandmother.  The father of her two other children (the youngest now pushing adulthood) has Stage 4 cancer while her mother-in-law has terminal cancer.  The recession has caused Lynn, a former librarian, to retire early.  Sue, also divorced and a single mother by age 35, is currently an administrator for Queen Mary University.  Tony is still a cab driver and sometime actor, and is still married.  Paul, his wife, adult children, and grandchildren continue to reside in Australia.  Symon and his second wife are now foster parents to several teenagers.  Nick is married to his second wife.  Neil's friend Peter currently sings for a band.  Neil still works in politics.  Finally, Bruce is still teaching and spends time with his wife and two sons.

Peter, last seen in 28 Up, reveals that his critical comments in that film about then-Prime Minister Margaret Thatcher provoked a storm of controversy and criticism by the press and public.  The toll it took on him discouraged him from participating.  My reaction to his appearance was mixed.  He admits publicity for his new band is the primary motivation for appearing.  It's selfish, but that's not bothered me.

When a series regular like Nick or Suzy reflects on their life, these reflections are accompanied with footage from previous movies.  When Peter talks about his life during the 21-year gap, there is nothing from during that time to go along with it except for a blurry, hard-to-see still photo.  Consequently, this interview segment is lacking and briefly drags down the film.  28 Up, 35 Up, 42 Up, and 49 Up are the most crucial of the documentaries because it is during this time that these people's personal growth; evolutions of their views on life, political, and social views; and their lives' ups and downs are at their peak.

By 56 they are all settled in their ways.  Their previously shifting attitudes are now fully defined and solidified.  They cannot change themselves even if they wanted to; Suzy tells Nick - whom she has been in correspondence with - that she's always been the type of person to hold back her emotions, even though she knows it's healthier if she lets them out.  But she feels at her age, it's too late for her to change that.  Neil, now a minister, has resigned himself for the time being to a life without a significant other.  Just like any adult person, some of them experience brief pangs of "coulda shoulda maybe."  Sue would have loved to have a baby with her current partner, but at 42, she felt she was past that.  But she doesn’t dwell on it.

While the personal evolution angle that permeated the first seven films is now more-or-less nonexistent, Apted finds a new one, one that I hope will be increasingly examined in the next few installments. (That is, if Apted makes it that far; he would be 78 and 85 by the time he films 63 Up and 70 Up, respectively.)  That angle is dealing with middle age.  It's brought up in several interviews.  Bruce - who was in his early to mid-40s when he had his two sons - kind of laments the fact that at his age and health, he can't have his boys climbing all over him, lest he severely hurt his back.  Jackie, whose rheumatoid arthritis has left her unable to sit, stand, walk, and use her hands for long stretches of time, is displeased with the government declaring her fit to work and taking away her disability benefits that are her only source of income.

Sometimes I've compared the experience of watching some movies to reading an epic novel, and in that regard these documentaries fit that comparison.  But whereas the average film has a beginning, middle, and end, the Up Documentaries resemble one of those epic 19th century serialized novels that Charles Dickens and other literary greats would pen for magazines.  Only this time there is no end (at least until Michael Apted pulls the plug) and nothing in these people's lives are predetermined.

56 Up is now playing at the Landmark Ken Cinema.