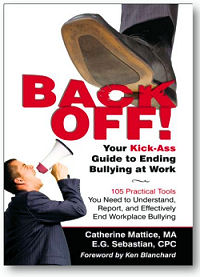 She has become active in the International Association for Workplace Bullying & Harassment (IAWBH). Her expertise in combating bullying led her to establish her own consulting company, Civility Partners. She is also an adjunct professor at National University, Southwestern College, and Brandman University, where she teaches communication courses. 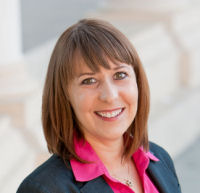 All of this knowledge and experience led her to co-author Back Off! with communications expert E.G. Sebastian. The cover of the book promises easy to understand steps that can be taken to end workplace bullying. Inside are assessments, questionnaires, checklists and other practical tools that anyone can use to evaluate and then act to reduce the stress of their situation. Bullying is clearly defined as an ongoing phenomenon, not a one-time occurrence. Everyone has bad days at work, and an occasionally fit of yelling or rude behavior is not the same as ongoing behavior that seeks to diminish another person. According to studies quoted in the book, one-quarter to one-half of employees experience workplace bullying at some point in their careers and many are forced to quit and seek new jobs because of it.

The book doesn’t take the “I’m just a victim” mentality that so many bullying treatises do. Without blaming the “victim,” it acknowledges that there are things that a target can do to reduce the abuse they suffer and changes in behavior that can change the environment.

“Employees are often hired for technical skills, but fired for lacking communication skills,” is one of the many truisms the book imparts. Being a great doctor or engineer does not necessarily mean one is great at handling people. Some people think the only way to get others to do what they want is through intimidation and coercion. Bullying is not always top-down, but can exist from a lower-ranking employee to his or her boss, or among peers on the same level.

The costs of such bad conduct are huge, to the individual who is the target and the organization that employs them. If someone doesn’t want to come to work, sick days go up. And the person may not be feigning illness—enduring bullying can lead to actual physical maladies such as headaches, stomachaches, insomnia and other stress-induced problems. As the rash of recent teen suicides has demonstrated, in severe cases bullying can lead to suicide and adults are not immune from this most drastic response to the problem.

The roles one adopts in high school of bully or target often continue into adulthood and into the workplace. The advice in the book aims to break the cycle and teach people to stand up for themselves in a non-confrontational way so that they will not be an easy target. Mattice and Sebastian even cover important topics such as body language, posture, and tone that can help curtail bullying and make the victim less of a target. 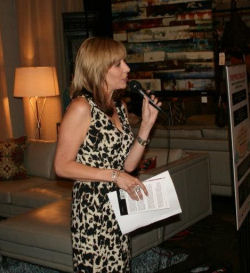 The book also addresses the very important, but often overlooked roles of “bully’s assistant” or “bystander.” It has long been said that those who are not part of the solution are part of the problem. Many people are afraid to say anything when they see a co-worker being abused for fear they will be the next target, but the fallacy of this is that if others would call out the bully on the inappropriate conduct, it would end it. Saying nothing provides tacit approval, so the bully takes the silence as reinforcement.

While offering solid advice, Back Off! doesn’t give “one size fits all” solutions, since there can be many factors operating in a complicated work environment and that taking the problem to HR or to a higher up could make some situations worse rather than better. As much as one would like to not give up, sometimes for the sake of an individual’s mental or physical health, the only answer may be to quit. But the book also points out examples in which people were able to successfully change their environment, and of bullies, who when confronted about the conduct said, “Do I really do that? Do I make you feel that way? I’m sorry.” Often it is worth to make an effort to try to fix the problem and Back Off! provides some easy-to-follow steps to give it a try.

Back Off! also has a foreword by business-book guru Ken Blanchard, who heartedly endorses the advice Mattice and Sebastian give. Back Off! is available from most online booksellers.

Walter G. Meyer is the author of the novel, Rounding Third, that powerfully addresses teen bullying. He travels the country speaking about the topic and he is a frequent contributor to ECM.