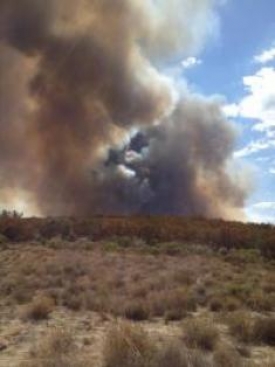 Back in November 2012, attorney Cynthia L. sent a letter to Robert Eben, Superintendent at the Bureau of Indian Affairs in Southern California. The letter was copied to Monique La Chappa, Chairwoman of the Campo Band of Mission Indians, to Invernergy, the project developer, and others.  That letter complained that a comment letter previously sent in June 2011 was inexplicably omitted in the record f the Scoping process for the Environmental Impact Statement and that the draft EIS ignores the concerns raised.

The June 2011 letter, sent to Eben, noted that the  fire District’s jurisdiction “essentially surrounds the Cmapo Indian Reservation.”  The District asked that a list of 17 points be address in the EIS.   These included analysis of fire risks, provisions for adequate fire and emergency services during construction and operation, compliance with relevant fire codes, effects of new transmission lines on firefighting, availability of water for firefighting, fire and emergency safety practices, a fire protection plan and compliance measures, site safety and access routes, storage of fuels and hazardous fuels, defensible space and vegetation management, enforceability of mitigation and more.

“We hereby protest that the Comment letter was not included in the record of the Scoping process,” the District wrote on November 13, which then asked for meetings to discuss the District’s concerns.

But in a blistering comment letter submitted February 25, 2013 Eldred concludes that the language in the Draft Enviornmental Impact Statement  (DEIS) dated December 2012 is so vague that it merely “recommends” but fails to require that the applicant prepare a Hazardous Materials Management Paln, a Health and Safety  Program, or a Fire Prevention and Protection Plan.

Without such requirements, Eldred observes, “there would be no legal basis for monitoring compliance and implementation.” Recommendations without requirements to minimize harm to the environment violations the National Enviornmental Policy Act (NEPA), she adds.   “The BIA must require compliance with mitigation measures before the BIA is allowed to approve the proposed Project lease.”

That lease, however, is nowhere to be found in the DEIS, which impedes review by the District and the public, further violating NEPA, the letter states. The District’s letter notes that fire hazard has also been identified as an issue by the public.

Shu’luuk wind is proposed on land that includes sites charred by the 2,500 Shockey Fire last summer. The wildfire destroyed homes and killed an elderly resident.  Firefighters in the remote region were unable to prevent this damage despite only mild winds and no other major fires burning elsewhere in the region.  The Old Fire last year in Campo also charred thousands of acres.  Southeast San Diego County is also the area where the devastating Harris Fire began, which merged with other fires in the region during the 2007 firestorms –fires that burned 13% of the County's total lands (369,000 acres), killing 10 people and forcing half a million residents to evacuate. Damage was estimated at over $1.5 billion, according to the County's report after the firestorms.

“A failure to mandate even minimal fire protection standards or a protection plan will not only endanger workers on-site, it represents a potential fire threat to the surrounding communities,” the District’s attorney observes.

The fire District’s attorney also takes the BIA to task for limiting the “cumulative study area” to only the actual project site, calling that an “unsubstantiated assumption that is contrary to fundamental NEPA concepts.”

She adds pointedly, “Fire hazards are not limited only to wildfire. An on-site fire, if not properly controlled and managed, can easily spread to surrounding areas…Should it spread and reach nearby project residences, or the adjacent gas station, the fire could result in cumulatively considerable environmental impacts.”

Further, the BIA provided “No analysis of the potentially significant cumulative impact of the additional hazardous and flammable fluids” to be used on the site including gasoline, diesel fuel, lubricating oil, grease and solvents.

The attorney concluded by denouncing the DEIs as failing to meet even “minimum standards for implementation and enforcement or eliminate damage to the environment as a result of implementation of the Project.”

ECM has asked the BIA for comment and will publish its response if received.