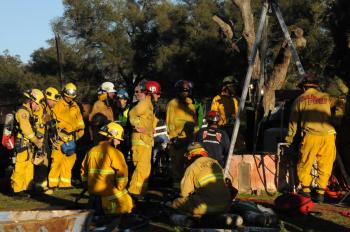 March 11, 2013 (Potrero)— Gerry Fowler, 43, and his father were working on the well they rely on for water yesterday when planks of wood used for support gave way. Fowler’s father was able to keep himself from falling, but  Fowler fell 35 feet to the bottom of the well.

An emergency call was placed to 911, which led to mobilization of multiple fire agencies, as well as Mercy Air and American Medical Response.  The patient lapsed into unconsciousness during the ordeal and was listed in critical condition as of 11 p.m.

"I could not believe it when I found out he was in the well," said the victim's wife, Jessica, who awaited word through the ordeal along with the couple's 12-year-old son and the victim's father.

According to Battalion Chief  Jeff Lannon, the first Engine on scene, a Cal-Fire unit, improvised with a one inch hose and air bottles to get air down to the patient and made first contact. A firefighter could not be lowered immediately while they evaluated the situation, so they could not see how  the victim was doing. But contact was made by shouting down into the well. 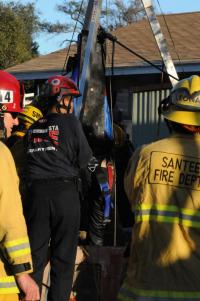 When more specialized rescue units arrived they could assess the air down below. The improvisation was successful and the air quality was acceptable.

The second step was to set up a hoist system, which is essentially a tripod, using a mechanical advantage system. This system uses pulleys and ropes. This system allows the firefighters to use their brawn, but effectively lower or raise less dead weight with each pull. This allowed a firefighter paramedic and another rescuer specialized in confined space rescue to go down and make physical contact with Fowler and do a basic medical assessment.

The patient was under a slab of concrete and water rose at eight inches an hour, so they had to pump water out to keep Fowler’s head above water. Emergency responders also had to contend throughout with the air quality inside the well, which fire agencies handled with an air manifold system to pump air down to the personnel and the patient. They also had to face the possibility of the patient getting very cold, known as hypothermia.

This system also allowed them to monitor the quality of air in the well throughout the incident. Air in a confined space can be unsafe for breathing and become such very fast, why this is critical.

The balance in a rescue of this type is the safety of the personnel versus the need to get the patient out and ultimately to a trauma center. If you move too fast you can add injure rescuers , adding patients  and complicating the rescue. This is why there are specialized 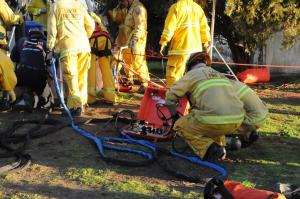 teams that respond to these emergencies.

In this case the Confined Space Rescue Team from Chula Vista Fire Department and Santee were dispatched to the scene as well as other units from around the county. While many firefighters are trained in the basics of confined space rescue, these teams have the specialized equipment for it, and train to do this on a regular basis.

Coordination of an incident of this type is paramount, and the fire service used effectively the Incident Command System (ICS), where people are assigned different responsibilities. This allows for people to concentrate on a single job, and prevents chaos at an emergency scene. This system is standard in the United States.

According to Chief Lennon these types of highly technical rescues are thankfully rare. This is the only second incident in his career, and the most complex he has ever faced.

Once they were able to get a harness down to the rescuers, who put it on the patient,  the team lifted Fowler to the surface. The harness used has a half board to keep his back in line. Once outside, the patient was packaged by Mercy Air personnel, as well as American Medical Response medics and 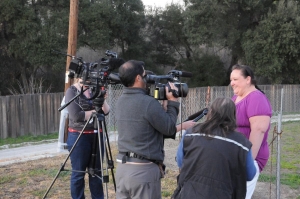 Firefighters. Then he has moved by ground ambulance to the Potrero Fire Station, where Mercy Air flew him to the Trauma Center.

"I thank the firefighters for getting him out," Jessica Fowler said. "I could not bear to watch when the pulled him out."

It took multiple agencies, ranging from Chula Vista and Santee, to Lakeside and Cal Fire, as well as others, two and a half hours from the time of the report to the ultimate extraction.