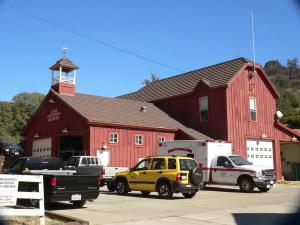 March 30, 2013 (Julian) – Julian Cuyamaca Fire Protection District’s Acting Battalion Chief Cris Cornette has sent a resignation letter to the Board. In his letter, he faults the Board for not fighting to prevent a County takeover of the all-volunteer Department.

Now in a message posted on the Julian Connection, Cornette calls on community residents to attend Thursday’s Board meeting and “demand the immediate removal of ALL board members.”  He adds that he would be willing to “step up to bat” and serve as a board member if asked--or return as Captain, but only if the current Board is replaced.

In a blistering letter to the Board, Cornett listed his reasons for his resignation.

“If the current board decides to hire a District Chief I would like to have my name removed from the candidates list. As I told you on our last phone conversation the whole hiring process has been compromised by board members publicly stating that `Cris Cornette will never be the Chief" and that the only reason I was put on the Chiefs list was due to "Public Pressure.’"

But he left the door open to return – if the current board is replaced.

“I would love to serve my community as the Chief, but not with a Board who does not care what my Firefighters want and can’t find the strength to work towards keeping our Fire District out of the county's hands,” he wrote. “I have turned in my vehicle and it's equipment at the station tonight. Remember the lives and property [of] this community are in your hands.”

The Board is currently weighing a proposal to dissolve the District and join the County Fire Authority to solve budget woes. Residents have voiced concerns that such action could jeopardize public safety, with potentially longer response times. The Board president has indicated that he is keeping all options open, for now.  Committees have been formed for fundraising as well as seeking ways to trim the budget.

At the last Board meeting, an announcement was made by Fire Captain James Stowers that an anonymous donor has pledged enough to wipe out this year’s entire deficit, but the Board refused to commit to turn down the County’s offer and keep the District independent, further fueling the controversy.