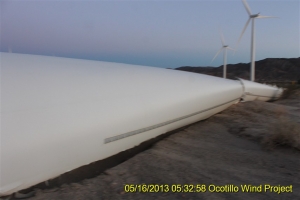 By Sierra Robinson and Miriam Raftery

Only Supervisor Dianne Jacob, who represents East County, made an impassioned plea to protect the health and safety of rural residents, who have repeatedly voiced concerns over risks from infrasound, stray voltage, noise , fire danger, turbine collapse and blades thrown off.

Emphasizing those points, less than 24 hours after the vote, a turbine in nearby Ocotillo threw off an 11-ton blade. (photo)

Supervisors also voted 4-1 to gut Boulevard’s community plan to enable large-scale turbine projects over the unanimous objection of Boulevard’s Community Planning Group. In addition, at the request of Supervisor Bill Horn, supervisors voted to exempt Tule Wind, which was previously approved, from new pure-tone noise requirements.  The ordinance contains requirements for a C-weighted scale to regulate noise as well as setback requriements, but provides the option to waive requirements for certain areas north of I-8.

A separate vote unanimously approved streamlining procedures for approval of small turbines.  The small turbine provisions had broad support, with the exception of some who argued that a third regulatory tier for mid-sized turbines should be established.

Supervisors heard extensive public testimony last week, including impassioned pleas from rural residents opposed to the large turbine provisions, as well as testimony from industry representatives and lobbyists in favor.  Supervisors delayed the vote until today after receiving a document from attorney Paul Volker on behalf of two nonprofits opposed to the project (Protect Our Communities Foundation and Backcountry Against Dumps), as well as Donna Tisdale, chair of Boulevard’s planning group.  Staff found the documents contained no new material that would require additional public comment.

The County’s top health official,  Wilma Wooten, stood by her report concluding there are no health related impacts confirmed from wind turbines, only “anecdotal” incidents. After the hearing,  Tisdale said of Wooten; “That woman should be ashamed of herself."

The Board split the vote into two parts.  The small ordinance provisions passed unanimously.

The large ordinance provisions and changes to Boulevard’s community plan, along with certifying the environmental impact report. 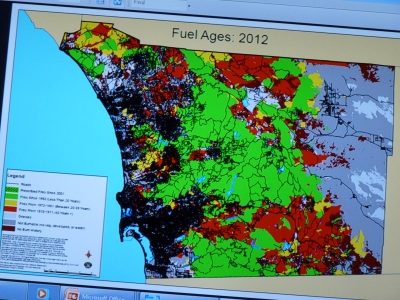 “The biggest issue for me is fire,” she said, noting that the EIR confirmed the fire risk is “significant, unmitigatable and unavoidable” with large turbines.  Jacob asked to have a map displayed showing the highest fire danger areas marked in red—the very same areas proposed for large turbines. (photo, right)

“It’s not a matter of if this area will burn. It’s when it will burn,” she said.  She also noted that aerial firefighting can’t be done above 500 foot tall turbines, since air drops work best under 350 feet.  Nor are volunteer firefighters equipped to fight electrical fires at turbine farms.

Jacob stated before the vote that the 24 impacts that can’t be fully mitigated at large industrial wind farms were, “beyond troubling and I've never seen anything like this In any environmental document that's come before the board since I've been on it, or in my days since I've been on the planning commission for that matter.”

She voiced serious concerns over potential health impacts on residents and stated that while the science is not conclusive, she would rather err on the side of protecting public safety.  In addition, she voiced concern that utility rates could rise as a result of these projects.  She called for rooftop solar  and small scale turbines as safer means of reaching energy independence that do not “destroy the lifestyle of the people that live in rural communities.”

As for the “over riding public benefits” that could trigger a waiver to allow large turbines closer to homes, Jacob said, those are “laughable.”  …Industrializing our pristine backcountry a public benefit? I say no.”  She asked her colleagues, “would any of you in this room like to live next door to a large wind project?”

Supervisor Dave Roberts also seemed cautious about approving the large turbines. “I have major concerns on large ones,” he stated. He voted for the ordinance, indicated he felt a process needed to be in place, but added, This does not approve one wind turbine and on every large project it will come before the board.”

He added, “If we don’t resolve these issues, including fire, I will not be supporting large turbines.…What happens in district two affects district three,” he observed.

Roberts did not mention his views on industrial-scale solar projects also proposed on 8,000 acres in Boulevard; changes to Boulevard’s community plan pushed through by Supervisors enables large-scale solar as well as wind.  Roberts’ district includes Soitec, manufacturer of solar panels proposed at one of the large-scale projects in Boulevard.

Supervisor Bill Horn also commented on the project, stating, “I don’t really like these huge turbines. If they built more nuclear power plants you would not need this.”

However, he went on to not only vote for the ordinance, but attempted to introduce language to weaken noise protections for residents.

Supervisor Jacob requested that an annual report on the ordinance be provided to the board. 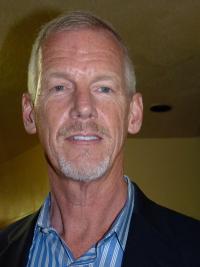 Jim Whelan (photo, left) represents the San Diego Renewable Energy Coalition which includes large wind, solar and utility companies. After the hearing, Whelan told ECM, “I’m pleased that the County has takent his important step forward to facilitate the process for review and approval of renewable energy projects in San Diego County.”  But he said the C-weighted noise restrictions “remain a concern” for the industry.  He voiced hope that changes in technology may ease noise problems in the future.

After the hearing, Bob Maupin told ECM “Looks like they bought all the right people.”

Maupin also voiced concerns over electromagnetic frequencies found at large energy projects and said friends with pacemakers have told him that they can no longer drive down Alpine Boulevard due to the buried Sunrise Powerlink high voltage lines.  Friends have told him that on Alpine Boulevard it “feels like their heart is jumping out of their body.”

Edie Harmon is, an Ocotillo resident living amid a wind project where residents complain of complaining of headaches, ringing in the ears and dizziness.  She likened the wind industry to the tobacco industry, which long denied health problems even as evidence mounted of tobacco-induced  health conditions.

“To me, it’s just gut wrenching to have staff get up there and say there are no health impacts,” said Tisdale, whose community includes Manzanita tribal members suffering numerous cases of cancer and other health issues.  Stray voltage 1,000 times normal has been measured in their homes near the Kumeyaay wind project in Campo.

Asked if her attorney would be filing legal action against the County over the  wind ordinance vote, Tisdale told ECM, “That’s what I’ll be recommending to the boards of our nonprofits."

No developer, no roadbuilder, industrialist or farmer has ever even contemplated--much less carried out--the degree of East County environmental devastation just approved by our County Supervisors; those we've (ostensibly) entrusted to faithfully represent us.

Area residents are crushed; their way of life, stolen and destroyed.

Land destroyed, animals killed or displaced, and, majestic birds of prey--many of them endangered and formerly "protected" by Federal law--chopped to pieces by turbine blades. Wind farm industrialists, you see, are allowed to kill as many birds as they like for the next thirty years. http://www.nationalreview.com/article/348424/latest-wind-energy-outrage-robert-bryce

In fact, these wind (and solar panel!) farms are little more than hideous monuments to the the destructive power of political ideology (currently regnant in Washington) and the conscienceless greed of companies like Iberdrola Renewables who are willing to exploit it.

Shame--deepest shame!--on Ron Roberts, Dave Roberts, Greg Cox and Bill Horn for their cowardly capitulation and betrayal of the people and places they are supposed to represent.