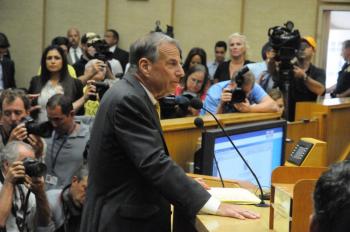 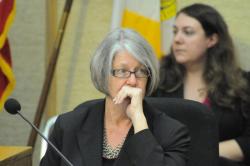 Eighteen women have claimed inappropriate behavior by Filner over the years ranging from sexual harassment to unwanted flirtation.  But only one (city employee Irene McCormack-Jackson) has filed a lawsuit.

Prior to the vote, Council heard public testimony from speakers split nearly evenly between those speaking in support and against the Mayor. The Mayor’s support came mostly from poor and ethnically diverse communities south of I-8. Opponents mainly came from wealthier communities.

Forty people signed up to speak, though some ceded time to other speakers. Many supporters spoke of the good the Mayor has done for minorities and the disadvantaged. For example, Maria Ochoa (who spoke in Spanish through a translator), said that Filner sought justice for those with little or no power. She asked why those seeking to force Filner out “ who know the 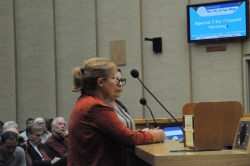 laws of the state of California, why now?”

Rosa Placencia said she is “sorry” over what’s happened.  “I have spent time with Mr. Filner. When we needed help he was always there to help us.” 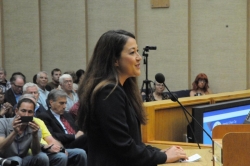 Lani Lutar, a conservative and past head of the San Diego Taxpayers Association, opposed having the City cover any of Filner’s liabilities. “I come before you as a concerned citizen and an advocate of victims. The decision has to be the in the community’s best interest. There has to be no payment.”

Carol Eastman urged Council not to accept the resignation deal and pay any legal fees for the Mayor. Instead, she wanted to allowthe recall effort to continue. “We will recall him, do not sell us out.”

A resident of the Alpha Project, a shelter for homeless people, said that while the Mayor personally helped her, because of what he did, “You should resign.”

ECM also talked with Enrique Morones before the vote was taken. He told ECM that this “was a sad day for the city,” and that we should not forget Filner’s 40 years of working for the disadvantaged.

After the public comment period was done, the City Council went into chambers to discuss matters with Jan Goldsmith, City Attorney. Under the Brown Act this matter can be discussed behind closed doors, since it is a personnel issue.

The mood was tense,  like waiting for a jury to come back with a verdict. After an hour and a half, Council came back to announce the decision on the settlement.

They decided to accept the agreement as negotiated during the early part of the week.

The Legal Explanation of the Agreement

The City Attorney, Jan Goldsmith, explained why the City will agree to “provide a joint legal defense through the City Attorney’s office for the City and Filner.” This is only for those cases that involve City employees and City contractors.

He also said that under California Law “the City is strictly liable for sexual harassment of City employees by City supervisors, including the Mayor. The City cannot avoid liability by claiming lack of knowledge of the conduct.”

Moreover, there will be a cap of how much the city will cover for any private legal counsel Filner will get, if he decides to keep counsel. The cap is $98,000.

Goldsmith also said that the Office of the City Attorney has recused itself on any criminal investigations that might be coming down the pike, though they will have to help defend the Mayor on civil charges.

Complaints made to the  Sheriff have been referred to the state Attorney General, since District Attorney Bonnie Dumanis has recused herself, having previously ran against Filner for mayor.

Filner entered the chamber, and took a seat waiting for Goldsmith to end, and then took to the microphone for his farewell address. As he entered his supporters rose to their feet and gave him a round of applause.

“I offer a deep apology, to certainly all the citizens of San Diego, and to you, and the citizens that you represent,” he said, his tone contrite.  “The City should not have been put through this. My own personal failures were responsible and I apologize.”

He also apologized once again to the women he hurt. For his former fianée, he added, “I love you very much. You came to love San Diego as much as I did and you did wonderful things in the short time you were the first lady and I personally apologize for the hurt I caused you.”

He was in tears as he read that part of the statement.  He choked back tears as he also apologized to the women he offended, to whom he had no intent to hurt. He also said that he will try to make amends “in any civil manner.”

To his supporters, he added, “I apologize to all of you…I let you down, we had a chance to do a progressive vision of the city for the first time in 50 years.” Then he urged, “You need to carry that vision forwards. This is not the time to let it die.”

To the Council, he cautioned, “I started my political career facing lynch mobs, and I think we have faced one here in San Diego. And you are going to have to deal with that.” He went on to remind Council that there are forces in San Diego that did not want change and would fight to prevent it by any means necessary. “Democracy is the process--San Diego needs due process.”

He also faulted media for feeding the furor.  “You have unleashed a monster and we will be paying for this affront to democracy for a long time,” the Mayor said. “The hysteria ended up playing into the hands of those who wanted a political coup--the removal of a democratically elected Mayor, purely by rumor and innuendo.”

He did admit that he was responsible for providing the ammunition to his opponents. But he added, “There are well run interests who have run this city for 50 years who pointed the gun, and media and their political agents pulled the trigger.”

Filner was philosophical, saying he is stepping down for the good of the city. He has never been known as a quitter and quoted Teddy Kennedy:  “The work goes on, the cause endures, the hope still lives, and the dream shall never die.”

Gloria looks to the future 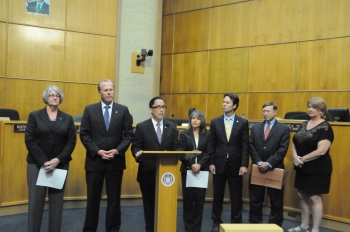 Gloria, who will serve as Acting Mayor after the 30th, said to the press afterwards that while none is glad to have reached this point, it is time to move on. “This should have been the beginning of a new positive era,” he told the assembled press. “We lost ground over the past few months; as of today we are done losing ground.” Hear audio of Gloria's full statement.

He said that among other policies, he intends to implement a top down review including a revision of the sexual harassment policies.

It is time to get back to work, and move the city forwards, he emphasized. “It is time for San Diego to come together; it is time to heal.”

ECM asked whether the progressive policies of working in the neighborhoods would continue. His answer was an emphatic yes. “The Council members standing here with me care deeply about their districts and the neighborhoods. That will not change,” he maintained.

After the meeting, ECM talked with Michael Pallamary on the status of the recall.

He told ECM that he “intends to return to normal life,” adding, “I have never felt prouder of the people of San Diego.”

Pallamary provided a warning for San Diego politicians. “A new sheriff is in town," he concluded, "and that sheriff is the people of San Diego.”

“Last November, San Diegans didn’t just choose someone to be the Mayor," she said. "They endorsed a Democratic vision for the future. From investing in renewable energy to highlighting our role as a border community, from standing up for working families to embracing the diversity of our people and the strength of our neighborhoods, they voted for a distinctly progressive agenda. That mandate is greater than any one person, and now it remains our responsibility and privilege to see it through.”

bill clinton did far worse, yet he is a hero to all libs.  i guess filner just doesn't have the slick willie charisma

First he apologizes and admits that he needs help. Later, he labels himself the hapless victim of "hysteria" generated by political opportunists who've spread "rumor and innuendo."  After all, why let consistency stand in the way of (a preposterous) rationalization?