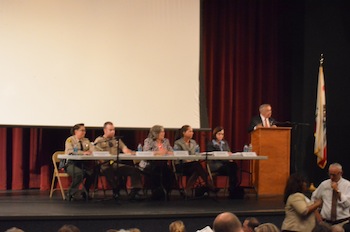 State Senator Joel Anderson and District Attorney Bonnie Dumanis came to the forum at West Hills High School to meet residents in Santee last week. The forum presented a panel of specialists in child safety issues, as well as a question and answer session.

Jesse Navarro moderated the forum and selected questions submitted by the audience. He emphasized the importance of “the community coming together” to keep kids safe.

Navarro introduced special guests, including the Chiefs of Police for both La Mesa and El Cajon and high ranking officers for the Sheriff’s Department as well as elected officials. He advised the audience that they were “special guests, since you made the time to come here.” 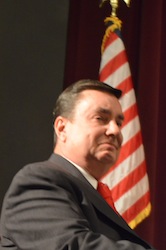 Deputy Benjamin, assigned to the Santee Station, spoke first. The issue of drug use among our children “is dear to my heart,” she started. “The average age of initial children experimenting with drug use is middle school age. Children will be using cigarettes, alcohol, marijuana, prescription drugs, and heroin.”

As parents, she said, “There are techniques that we can use.” She advised parents to keep communication channels open with teens and pre-teens, who “will resist this.”

“You should be aware of what sites your children are visiting,” she advised, but acknowledged that teens will disagree with her over privacy concerns. In her view, parents should always know who their children’s friends are, both online and offline. “Technology is a wonderful thing, but also extremely dangerous. I would suggest you check their cell phones, their text messages, their photos,” she said. “Again, they might have passwords on their phones, but you as a parent should have access to them.” 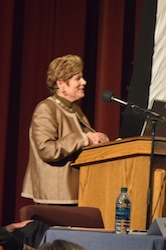 She also suggested looking in their bedrooms, drawers, and backpacks. If they drive, also check their vehicles. “We need to allow them to grow up,” she said, “but we also need to protect them.”

Moreover, “know their friends,” she advised. It is important to understand their circle of friends. She added that these days we live in households where a two household arrangement is common. Understand what are the rules at homes they might visit. Some adults have no issue with young people having access to alcohol or drugs.

The DA provides this software for free and you can pick a copy at the Hall of Justice in Downtown San Diego, or any other branch of the DA in the county.  They were also distributed for free at the event.

Monitoring children's online activities does provide protection, but also raises privacy and trust issues. Not every agency goes so far as to advise reading teens' communications.

The federal government offers tips on cell phone use by kids:  http://www.onguardonline.gov/articles/0025-kids-and-mobile-phones

Pearlstein of the CHP explained why the CHP has the hard nosed attitude about zero tolerance for alcohol use by minors behind the wheel.

“In the last ten years 69,000 15 to 19 year olds have perished in automobile accidents,” he told parents. He added that during the first year after a driver obtains his or her license is the highest risk for that driver to die in an accident.

He noted that “90 percent of the time speed is a factor, [in] 40 percent alcohol is involved, and [with] half of the fatalities seat belts are a factor.”  This is why the CHP has a campaign of zero tolerance of any alcohol in your system if you are under 21. They will also enforce the learner permits, to prevent injuries and fatalities.

There is more. Over 600,000 kids in the same age group have been injured. The factors for the fatalities are speed, lack of seat belts or wearing them improperly, and driving under the influence.

Texting and calling on a cell phone are now overcoming alcohol as a major cause of accidents. Put the phone down, he advised both parents and adults. “There is no text that is worth your life.”

But parents are the most important tools. If parents know their teen is driving like a maniac, perhaps it is time to take away the keys. If the child is texting, take the phone away.  Talk to your kids. Be an example, also, don’t do things yourself that you’ve told your child not to do.

This is a first in a three part series. The Panel itself divided naturally into three related but important subjects, law enforcement, drugs, bullying and the legal system.