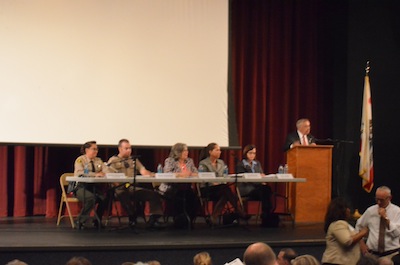 August 29, 2013 (San Diego) – Dana Stevens, Executive Director of the Communities against Substance Abuse (CASA), presented a PowerPoint presentation on bullying for parents last week during a forum on child safety in Santee.  East County Magazine has also recently spoken with other bullying experts to get tips on keeping kids safe.

“Often times victims of bullying hurt themselves, run away, quit going to school,” said Stevens, adding, “Victims often blame themselves.” This can lead to depression, sadness, and withdrawal.

According to Stevens, 18% of ninth graders and 17% of eleventh graders report seriously considering suicide. She added that 14% make a plan to “carry that out.”

Bullying was not in the social lexicon until at least the 1970s and that is when research into bullying really began, Stevens noted.  Bullying is defined as “a power imbalance between the bully and the target.” It could involve many aspects including gender, language, size of the victim, as well as popularity in school, among others.

Bullying can take many forms, ranging from physical to verbal abuse. Then there is social bullying and that which is spread though rumors and innuendo. Also breaking friendships. “This is the kind of behavior we typically see in the middle school campus,” Stevens said.

“Verbal bullying is the most reported form; 77% of students report verbal bullying, name calling, teasing, and the bullying we hear the most now is cyber-bullying.” It is carried out through social networks, such as Facebook, Instagram and instant messaging. It can include e-mail and phones. With one stroke, the bully can send his or her message to the world, and it cannot be retrieved.

For parents, it is important to empathize with their children, to listen, and to teach their kids to walk away. Do not keep the violence going by encouraging the bully. Do not give the bully what they want, an audience. And for the victim, Stevens advised, “Always remember, it is not your fault.”

How does a child avoid becoming a victim? Stevens recommends children develop self-confidence, to speak up, and to develop social skills.

Adults need to be a model to children and let them know, firmly, that violence is unacceptable. Teach children to solve conflicts among themselves in a non-violent way. Also do not be afraid to monitor what your child does in cyberspace, Stevens advised.

During ComicCon, ECM spoke to other experts on the subject, among them Carrie Goldman, the author of Bullied: What Every Parent, Teacher and Kid NEEDS to Know About Ending the Cycle of Fear. http://www.carriegoldmanauthor.com/

Goldman told ECM that there are ways for kids to prevent cyber-bullying. Among them, children need to learn “not to share their passwords and not to impersonate each other, and to become suspicious if they get a message that seems out of character” from a friend. This usually means that somebody hacked the account. 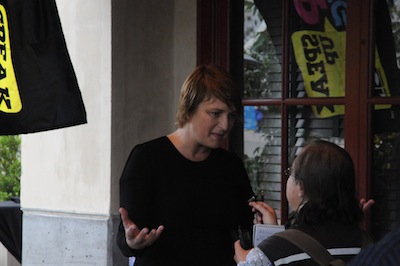 Kids also need to learn “not to forward along nude photos or other cruel message because they are not acting as a mere bystander, but as bullies themselves.”

Moreover possession of nude photos of minors can subject them to criminal penalties.

Goldman told ECM that adults are “the worst perpetrators of bullying” and that she gets just as many calls from adults as minors. There is quite a bit of bullying in both the workplace and the “online world and forums.”

Tina Malka of the Anti-Defamation League said the goal of the ADL is to move children “from the bystander position to the allied position.”  She added that “we know bullying is now a 24-7 thing. It’s all the time, it’s inescapable.”

Malka told ECM that the ADL produces educational material for children in the San Diego County and works with multiple school districts to bring awareness of the problem. Moreover, because of technology, “If you are getting bullied, you cannot just go home to get away from it.”

One of the programs the ADL runs in the county is called “No place for hate.” The objective of the program is to create a culture of tolerance on campus.

As a parent, ask your school what programs are in place, and how to deal with bullying. Chiefly, do not ignore it. We are well past the “boys will be boys” mentality—and bullying can have negative consequences not only for victims, but also for the bullies.

As Stevens said during last Thursday’s Santee forum, many bullies end up committing felonies as adults.