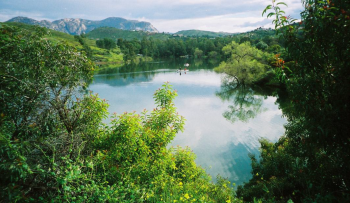 September 5, 2013 (La Mesa) – Four years ago, Helix Water District took back management of Lake Jennings from the County.  But now the board is weighing options to reduce its operating costs or raise revenues generated by the 9,700 acre reservoir in Lakeside. Those options include closing the lake, offering a long-term lease to a neighboring district, or privatizing the lake’s facilities by turning over management to a company such as  KOA, which operates campgrounds nationwide.

On September 13 at 10 a.m., the District will hold a public workshop at its administration building, 7811 University Avenue in La Mesa. You can also send comments to the board at  board@helixwater.org

"We'll be making a comprehensive Power Point presentation that we hope will generate an interactive discussion with the board and solicit their thoughts on future direction and activities of the lake,” Mark Umphres, the District's director of water quality and system operations, said. "A lake master plan was completed and presented to the board in 2007. As part of the workshop presentation, Mr. Bob MacKinnon of MacKinnon Campground Consulting, will highlight the key findings of this master plan."

District staff will brief the board on the history of camping and fishing programs dating back to the construction of Chet Harritt Dam and, specifically, the past four years of the District’s operation of the 96-space campground. There will be a review of the lake's current operations, improvements to the facilities, marketing efforts and financial performance.

The District took back management of the lake, which is owned by the District, in 2009.  The County had managed for the past 40 years. But maintenance costs are putting a strain on the district budget.  There are a variety of options, however, for resolving that matter.

Board member Joel Scalzitti has voiced concerns over district staff, at the direction of board chairman Chuck Muse, holding meetings with Padre Dam Municipal Water District officials without informing other Helix board members.  The meetings were reportedly to explore the option of having Padre Dam, which operates the successful Santee Lakes recreational facility and reservoir, take over Lake Jennings. But Scalzitti said Padre Dam representatives declined.

“I think it’s one of the largest assets that we have,” Scalzitti told ECM in an interview for our radio show on KNSJ FM 89.1.  “My biggest fear is closing Lake Jennings, or privatizing or leasing it out.”

Scalzitti wants to see the Helix District invest in upgrading outdated campground facilities that lack modern amenities such as Internet hookups, cabins, and more. He notes that Santee Lakes turns a profit for the district.  Santee Lakes offers visitors a swimming pool, spray park for kids, floating cabins, large RV spaces, and rentals including pedal boats and surrey bikes.  He also wants to see more education programs at the lake.

The district has made some efforts to promote Lake Jennings unique aspects, such as night fishing in July.  But Scalzitti thinks more needs to be done.

"My vision is we need to put a little love and work and  time into it, and have it pay back for the ratepayers,” he concluded.