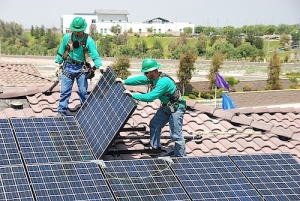 Update September 11, 2013:  This agenda item has been postponed until September 25th due to the absence of Supervisor Greg Cox.

September 7, 2013 (San Diego) Updated September 8, 2013 –On Wednesday morning, Supervisors will consider approval of the first phase of a “Renewable Energy Work Plan” to support renewable energy development – and determine just what types of renewable energy the County should pursue.   This includes an overview of energy resources available in the unincorporated areas including East County, a cost analysis of renewable energy options, and consideration of consumer choice alternatives for purchasing power from a source other than SDG&E, such as through community choice aggregation.

U-T San Diego reports that county government has been buying power independently since 2005 and currently buys 90 percent of its electricity from sources other than SDG&E, with estimated savings of $3 million over the last four years — and $700,000 in just the last fiscal year, according to Peter Livingston, the county’s energy and sustainability manager. Now the County is considering giving that same option to consumers.

“I initiated this because San Diego County has the ability to be the renewable energy capital and a leader in our region in terms of renewable energy,” Supervisor Dianne Jacob said on East County Magazine’s radio show.   Staff will present a work plan that includes options ranging from rooftop solar to community choice aggregation, “comparing that to the cost of large solar, large wind projects and having an eye on what is in the best interest of the consumer – not the large energy companies,” Jacob said. A cost analysis should include the costs to consumers – including impacts such as property value reductions and other potential negative impacts from some big energy projects,  she added.

San Diego's backcountry has been targeted by energy companies for conversion of thousands of acres of agricultural, rural and public lands to solar and wind facilities, or what Jacob has called the "industrialization of the backcountry."  But increasingly, rural residents are objecting to negative impacts of such projects including noise, dust,  infrasound, stray voltage,  and destruction of views, habitat, and rural character.

The hearing  is open to the public and public testimony will be heard.   The Supervisors’ hearing will be held at 9 a.m. at the County Administration Building, 1600 Pacific Highway in San Diego.  View the proposed Renewble Energy Work Plan here.

Thanks to Supervisor Jacob for her leadership on this issue!  We definitely need both reliance on alternative energy and the structure for delivery.  The monopoly of energy transmission and distribution has given undue power to a so-called "public" utility.    On site solar power is the best way to provide for our energy needs.  Naturally, the "public" utility thinks otherwise.  The cables and transmission towers that blot the landscape allow them to make more income than on site solar!  As for those industrial-scale wind turbine: They are a fraud.  Some don't generate enough energy to replace what they use from the grid!