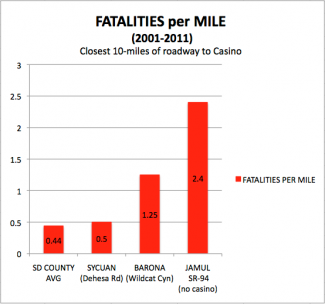 October 18, 2013 (San Diego’s East County) – Residents in Jamul are voicing concerns over a repaving project along State Route 94 that is causing dangerous conditions and delays of up to a half hour. Multiple sources have advised ECM that no warning signs are posting to warn motorists that traffic has been reduced to one lane. The delays are projected to continue through January.

Kim Hamilton, editor of the Deerhorn Valley Antler, says the current situation may be just a precursor of traffic congestion that could occur if a proposed  casino at the Jamul Indian Casino is built. Already,  State Route 94 has a fatality rate per mile that is nearly six times the countywide average—before any casino is built.

“ SR-94 is already dangerous,” she wrote, citing statistics from a U-T San Diego article on road fatalities on the nearest 10 miles of access to some area casinos.

Some local casinos were initially required to open alcohol-free, with alcohol added only after the casino could demonstrate that accident rates had not increased dramatically. Sycuan, for example, opened as a “dry” casino but obtained a temporary alcohol permit four years ago and  in 2011, a permanent alcohol permit after a study found no increase in alcohol-related accidents in the area. The tribe has opted voluntarily not to serve alcohol on the casino floor, restricting alcohol to designated areas including restaurants, bars, and a high-roller area.

Can the dangers along a highway with a fatality rate as high as State Route 94 possibly be mitigated?

The Jamul Indian tribe has agreed to over $16 million in mitigation, including widening portions of the highway if the casino is built. But opponents contend that no amount of road improvements can sufficiently mitigate the risks on a highway that is already among the most dangerous in our region.

"Mitigation offered is very minimal," Hamilton told ECM, citing access to the casino as a particular concern.  She added, "CalTrans put on a terrible `public meeting' with no presentation, just some easels and posters. We tried to compare notes after, but no one got the same information.  There was no seating, and they kept us standing. Really hard on a lot of us older folks."

Bolstering casino opponents' arguments, area residents have recently been subjected to numerous inconveniences due to blockages on the highway.  A truck carrying an oversized load recently broke down repeatedly, causing traffic delays for several days.  Numerous serious accidents have caused shut-downs or delays, raising fears that evacuations could be impeded in this wildfire-prone region during a future firestorm.  A planned enhanced border crossing at Otay is projected to increase traffic on this rural highway.

The current road repaving project is resulting in multiple stops, each lasting 5 to 15 minutes, the Deerhorn Antler Antler reports.  The website Jamulians Against Casinos reports even longer delays of 20 to 30 minutes in each direction, causing motorists to slam on brakes to avoid collisions.  “You can see the skid marks all over,” the website states.

Motorists are advised to take alternate routes, be aware of traffic backups on feeder roads, and use special caution when driving near Steele Canyon High School where students are present.

A Cal Trans page listing highway improvement projects has a broken link for the Highway 94 Jamul project.  However  the website Jamulians Against Casinos (www.jacjamul.com) has been posting daily updates on the repaving and expected closures or delays.  The site also asks residents to contact CalTrans and the Governor’s office with concerns over  traffic delays from the current project, as well as concerns over potential traffic impacts of the proposed casino.

I drive the 94 every day to and from work. Yes, there are delays. Today at Proctor Valley Rd, it was about 15 minutes until the other direction stopped and we could go. They had huge signs ahead of time, warning of delays coming up. Everyone just needs to be patient. Delays shouldn't surprise anyone. Frankly, I'm OK with the delays if it means a well-paved Highway 94. Long, long over due! It's been in horrible shape way too long. By the way, I looked again today, and I didn't see any new skid marks at all on the stretch from Dulzura to Steel Canyon Road...so I think some of the comments are a bit exaggerated.

As for the dangers on that highway....they were there long before the casino proposals. Where was the Jamul Planning Group all these years? And what about the Supervior Jacob? They should have demanded road and safety improvements years and years ago. Hearing them whine about it now seems disingenuous.

Thank you for an outstanding article that brings to light the serious and dangerous conditions on SR 94. Today, Saturday, the road work is between Simpson's Nursery, past the local businesses going west toward Steele Canyon. The roads are a mess. My wait time was 26 minutes going west. As I waited I counted the eastbound cars as they were finally moving. The total was 189 vehicles. I could not get into my office so I had to drive to Steele Canyon, Jamul Dr and down Lyons Valley Rd. As I arrived at my office the east bound traffic was again going thru. This time 237 vehicles went thru. Signage is poor. Some angry drivers too. The company doing the work appears to be doing a good job. There seems to be a lack of coordination or awareness of the traffic patterns along 94. Poor communications from Caltrans and no CHP to be seen.

The casino project has ignored the very numbers of the current traffic, accidents and deaths on 94. Instead they believe a bandage will suffice when we know it will simple exacerbate the dangers of a two lane rural road. Casino planners have completely ignored the additional compounding traffic of rapidly growing Tecate, Mexico. It is time our State government recognizes that a huge commercial complex dropped in a rural community with no support infrastructure is wrong. Couple that with a dangerous two lane road with International traffic, cars, trucks, semi trucks, motorcycles, bicyclists and buses all trying to reach their destinations and it is only a  matter of time for some catastrophic event to happen.

Great article.  It has been a trying time for many.   Just imagine what it would be like on Otay Lakes Road if the casino were built!  94 would be a nightmare but also Otay Lakes.  Everyone from Chula Vista, National City, San Ysidro and Tijuana would be using Otay Lakes Rd. to get to the proposed casino, which is also very dangerous.  Imagine all those cars streaming in from Otay Lakes Rd on to 94!  94 will be used by people from San Diego and Tecate going to the casino.  Expect many more accidents, delays, loss of property, injuries and deaths.  I really don't understand Cal-Trans.  Can someone explain why CallTrans seems to be doing so little to protect  the citizens who drive 94 and Otay Lakes rd. on a daily basis?  I don't get it.  Our way of life and our very  lives and those of our loved ones and neighbors could be in jeopardy.

Forget the Casino for now--Hwy 94 is already killing us in record numbers. Why? Here are my votes:

1. Many long stretches with no place to pass--let's fix that!

2. Many drivers unaware that there is a law that requires drivers to pull over when they are blocking 3 or more drivers--let's fix that! (Of course, there needs to be places one can pull off that are properly marked).

3. The speed limit and no passing areas need to be enforced--all the time. Let's fix that!

4. In some cases, the speed limit is too high. I think we need a 45mph speed limit in the vicinity of Steele Canyon Rd, another from West of Diane's to just east of the curves east of the new fire station, and a third from the bottom of the hill before Honey Springs to just past the Border Patrol checkpoint. (I get off at Honey Springs, so am unaware of areas further east--but I'm sure there are some.)