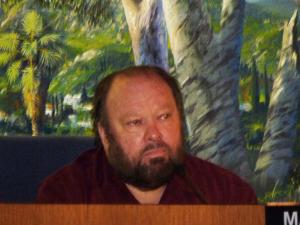 October 25, 2013 (El Cajon) – El Cajon Mayor Mark Lewis has resigned, effective immediately.  In his resignation letter, the Mayor  cited health reasons, including cancer, a dislocated shoulder and a minor stroke in 2010. “Unfortunately at times, this has caused me some difficulties in clearly communication my thoughts, including during the recent interviews  that have caused understandable concern,” he wrote, adding that he is stepping down to avoid further concerns by citizens and to “allow our City Council and community o move forward in their work to make this City the finest place it can be.”

He added, “I deeply love our town and have given a major portion of my adult life to its wellbeing and, so, this is a bittersweet moment for me."

The resignation comes two days after a group of Chaldeans appeared before council to protest what they called racist remarks made by the Mayor in an interview published in The Progressive magazine in May.  The Mayor later apologized for causing offense and said he is proud of all the city’s citizens, “especially those within the Chladean and other immigrant communities who have made the brave choice to leave their homeland and come to America.” He said Chaldeans represent an important and respected part of the El Cajon community.

Minorities now constitute the majority of El Cajon's population, including Latinos, African-Americans and Middle Eastern people.  An estimated 25,000 to 40,000 Iraqi Chaldean Christians now call El Cajon home.  Many came here as war refugees and umemployment among El Cajon's Chaldeans is over 60 percent.  The city also has the highest poverty rate in San Diego County at over 28 percent, though there have been signs of economic improvement in recent months.

The mayor's interview with The Progressive  included many positive remarks about Chaldeans but also some comments that have been construed as racially insensitive, including a remark about schoolchildren receiving free lunches being picked up by people driving Mercedes Benzes.  The remark came after Lewis was asked if there was resentment by some citizens against Chaldean refugees. Lewis also spoke about male dominance in the Iraqi culture and alluded to prostitution issues involving Chaldeans.

He spoke of drugs as the underbelly in the community and remarked that Chaldeans have made some Mexicans feel intimidated by pushing into their turf selling drugs.   In 2011 the FBI broke up a crime ring involving drug smuggling operations tied to an Iraqi organized crime ring and a Mexican drug cartel.

But he also praised Chaldeans overall as “wonderful people” and indicated that like the Viet Namese boat people, there are signs of Iraqi immigrants assimilating into American society.  “They are hard working, up early n the morning, working late at night,” he observed. “They are good residents. He noted that they can’t return to Iraq due to persecution because “they would be killed.” ” He said immigrants who learn to “play by the rules” can find that America is a “good land for opportunities.”

Mark Arabo, head of the Neighborhood Merchants Association, faulted the Mayor for “attacking children and the character of a commuity.”

Councilman Gary Kendrick told East County Magazine that he believes Arabo had a financial motive, since the Neighborhood Merchants Association has opposed the city’s new alchohol ordinance soon to take affect which restricts alcohol sales at some of the association’s member stores.

Lewis has served as Mayor in EL Cajon for 23 years and has overseen many changes in his tenure, besides the city’s changing demographics.  He stated that he is proud of revitalizations of downtown and economic development that has occurredo n his watch and that he looks forward to the new America on Main Street festival recently approved to celebrate cultural diversity and strength.

He oversaw consolidation of the city’s fire deparment with La Mesa and Lemon Grove, as well as construction of the new Public Safety Center.  He defended a half cent sales tax increase passed by voters as a “good thing” because it prevented layoffs of police and firefighters, and said public safety should always be a prirority.  He previously chaired Public Safety Board for SANDAD and as the county’s Waste Management Coodrinator.  He led efforts to make El Cajon the only city in San Diego that is zero waste.

Controversies during his tenure including the closure of East County Performing Arts Center, slated to reopen next year, as well as complaints of cozy relationships with developers and megachurches.  After religious videos were found posted on the city TV website , the City later removed them amid complaints that the City had violated constitutional requirements for separation of Church and State.

The City Council has not yet announced how Lewis’ replacement will be chosen, though in the past vacancies have been filled through appointment.   Most recently, in 2011 Council filled the vacancy left by resignation of Jillian Hanson Cox, who later pled guilty to felony charges involving her embezzlement of an employer’s funds. Historically, vacancies on the all-Republican council have been filled by planning commissioners in recent years.

Karen Marie Otter, a prominent Democratic activist, is calling for a special election. “We have eminently more qualified democrats to be Mayor of El Cajon,” she wrote in a letter to party chair Francine Busby, citing former council candidate Ben Kalasho, a Chaldean, and Vickie Butcher, an African American woman who formerly served on the city’s planning commission, as potential candidates to fill the vacancy.

Council will discuss how to fill the Mayoral vacancy at its next scheduled meeting on November 12 at 3 p.m.

Councilman Bill Wells will serve as Interim Mayor until the vacancy is filled.

Lewis has always been a racist. We knew this when he spoke out against the El Cajon pow wows. I guess El Cajon only gets offended when he speaks against the chaldeans. Is it racist if its true? I receive food stamps and have to go to the welfare office where I see chaldeans getting out of Mercedes and BMW'S. They apply for political refugee status and get it! Truth is they are not oppressed in Iraq! They are just capitalist who want to be here. They believe they are a "chosen people " who are entitled!