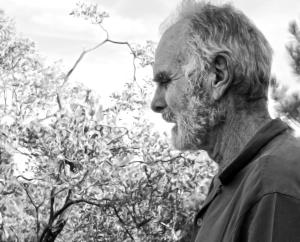 Duncan McFetridge is a poet, philosopher, wood carver, and a classical man who lives in a quiet cabin in the forest. McFetridge, who studied religion and Greek and Chinese philosophy, lives an ascetic life - he is someone who doesn't care about money the way most modern people do.  He says that justice and truth are supreme.

Yet this environmentalist, who loves nature, animals and simplicity, has struck fear in many of San Diego's most powerful movers and shakers. He successfully took on the building industry years ago to prevent development in his mountain community of Descanso, managing to have the Forest Conservation Initiative implemented by the County of San Diego. It is considered one of the most important environmental initiatives in the County; it has protected critical areas within the Cleveland National Forest. 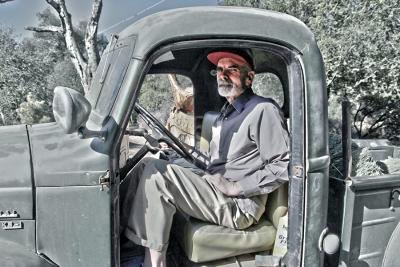 As one of the founders of the Cleveland National Forest Foundation (CNFF), McFetridge has teamed up with a diverse array of professionals and like-minded private citizens to protect the remaining undeveloped lands within the forest, as well as those lands whose future may impact the integrity of the wilderness. His organization, which has some of the top scientists in the world on its advisory board, is currently involved in two lawsuits; the most recent just filed weeks ago against Caltrans, challenging the validity of the environmental review document for its proposed expansion of Interstate 5.

Why would that man known for protecting forests become involved with a project involving a freeway running along the coast of San Diego?

"Why wouldn't we file?" he asked. "The plans for the expansion of I-5 will have profound impacts on human health, greenhouse emissions and lead to increased urban sprawl on existing farmlands and rural lands. It is a fragmented, last-century approach to a problem that can only be solved by investing in an efficient public transit system instead of widening freeways."

Research has shown that expanding freeways actually increases traffic rather than easing congestion, due to an increase in the volume of cars

CNFF's largest battle today is with SANDAG (the San Diego Association of Governments), which is the regional planning transportation agency for the county. The California Attorney General, Kamala Harris, and the Sierra Club joined that lawsuit, which was also initiated by the Center for Biological Diversity in conjunction with CNFF. 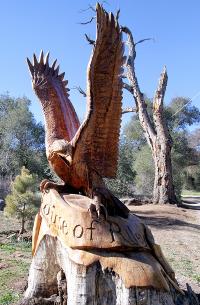 is over SANDAG's flawed transportation plan, which is in direct conflict with state policy on climate change.

Last spring, the Superior Court agreed with CNFF and other plaintiffs that SANDAG had ignored state law, with the judge stating, "SANDAG has abused their authority" by failing to reveal the massive increase of greenhouse gas emissions over the life of the plan. SANDAG appealed and the case it is currently in an appellate court.

"In SANDAG's 2050 Regional Transportation Plan there is a huge gap between what they claim they are doing and what they need to do to reduce greenhouse gas emissions. The gap is clearly illustrated on our website (http://www.transitsandiego.org/transitsandiego/images/total_emission_graph.jpg ),”said McFetridge. "State climate policy requires reductions greenhouse gas emissions by 80 percent of 1990 levels. SANDAG's backward plan will increase emissions."

McFetridge stated that the stakes of this appeal are very high. According to a Forbes magazine article (http://www.forbes.com/sites/ericagies/2012/01/23/california-sues-san-diego-over-emissions/), the outcome of this lawsuit "…could set precedent for the state, and possibly for the country."

The Philosopher-Poet Looks at the Big Picture

Sitting in his cabin at a custom table he built from monkey wood, surrounded by his abundant library of books, his two dogs, and many cats, McFetridge approaches life from a classical worldview in how things function. 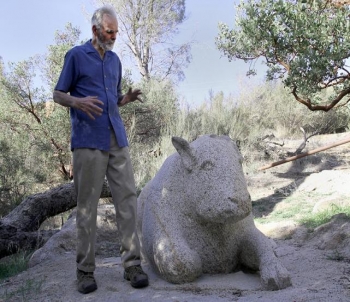 "I'm just a poet clinging to the truth, " he said. "The truth is that there are consequences for the earth if we don't respect it. These things I fight against are hurting our watershed, habitat and the self-sustaining life that inhabit the forest. Without forest and farmlands, the earth will be irreparably harmed."

McFetridge is a man who often uses the words goodness, truth and beauty in his discussions. He is a man concerned with the soul - the soul of humanity and of the earth.

These days, the work of CNFF consumes much of his time. At 73, McFetridge said he'd like to spend more time with his poetry, woodcarvings, and a new artistic outlet, boulder carving.

From a large boulder on his property, he carved a granite homage to his late bull, Romeo.

"Romeo was an old bull with some health issues on a neighboring ranch," he said. "As nature would have it, the younger, stronger bulls were attacking him, so I adopted him to protect him. Unlike most bulls, he was a gentle soul who would bow down to me when I came near. I believe he may have been a Buddhist monk in a past life - he was so peaceful and we were in harmony. I felt compelled to honor him with a sculpture." 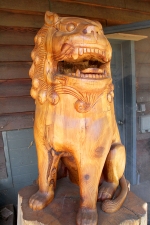 He shows visitors many of his other creations, including a large, Chinese-style lion he carved from wood, which sat at the opening of the San Diego County Fair one year. He trades his wood working skills for feed for his many animals. His life is simple, yet rich and full with ideas, thoughts, reflection and grace in nature--and a fighting passion to do his part to protect 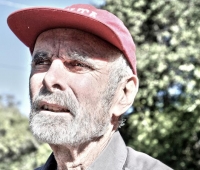 "These changes proposed by the so-called powers-that-be can introduce a death to the delicate web of nature we have here in San Diego County," he said. "The forest is 'the measure,' as John Muir once said. We must protect it."

A few years ago, My wife and I came up against Mr. McFetridge over a land use item. We won against McFetridge but lost to cancer. He is a sorry old man who lives as a hermit and in a different world. Yes, he does cost our region many, many dollars with his frivolous law suites. Tunnel under "Westfield UTC", I don't think so. A dire and useless act!!!
This man has caused tremendous harm with his selfish radical environmental agenda. There are millions of residents in San Diego County who demand better transportation and more available housing for our families. McFetridge's wasteful frivolous lawsuits are costing the taxpayers of our community millions of dollars in wasted time commuting, and denying families the dignity of buying houses...