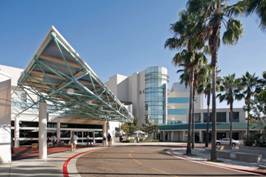 February 6, 2014 (San Diego's East County) - The Grossmont Healthcare District (GHD), the public agency that serves as landlord of Grossmont Hospital on behalf of the community, has launched an effort to prepare for a possible June 2014 ballot measure to extend the existing lease agreement with Sharp HealthCare for the operation of the La Mesa hospital.

GHD board members at their Monday, Feb. 3 meeting gave the go-ahead to begin preparing a ballot measure with the June election as a target date. A final decision whether to proceed with a June election is expected in early March.

Concurrently, GHD and Sharp HealthCare are making final revisions to a lease extension agreement, which would be available for public review and input when finalized. GHD’s current 30-year lease with Sharp, signed in 1991, is scheduled to expire in 2021. Discussions have been underway for more than a year about extending the current lease for another 30 years, while making improvements to the current agreement.

“This is a unique opportunity for the citizens to consider extending the agreement with Sharp HealthCare,” said GHD CEO Barry Jantz. “This is a public-private partnership that has served the community for over two decades, bringing millions of dollars in Sharp funding to maintain and improve East County’s community-owned hospital as a state-of-the-art facility.”

Based on state law, voters of the East San Diego County region have the ability to approve any hospital lease extension between GHD and Sharp. In 2005, then-Assemblyman Jay La Suer of La Mesa authored AB 1155, which specified that GHD could extend its lease with Sharp, following a vote of the people. As a result, GHD is currently the only healthcare district in California allowed to consider a lease extension.

If a decision is made to proceed with the June election, it won’t be the first time in recent years the community has been asked about the future of the hospital. In June 2006, voters passed a $247 million bond measure, Proposition G, approving the measure by more than 77 percent -- well above the two-thirds required. Since then, general obligation bonds have been financing construction for several infrastructure projects at Grossmont Hospital.

Recent bond-related projects have included completion of the top three floors of the Emergency and Critical Care Center in 2009, and this year’s start of construction of a 74,000-square-foot, three-story Heart and Vascular Center and an 18,000-square-foot Central Energy Plant with new, energy efficient generators, boilers and system auxiliaries that will help meet the future utility needs of the hospital. Bond-financed construction at the hospital, which began in 2007, is scheduled to continue over the next few years and meet patient-care needs well into the future.